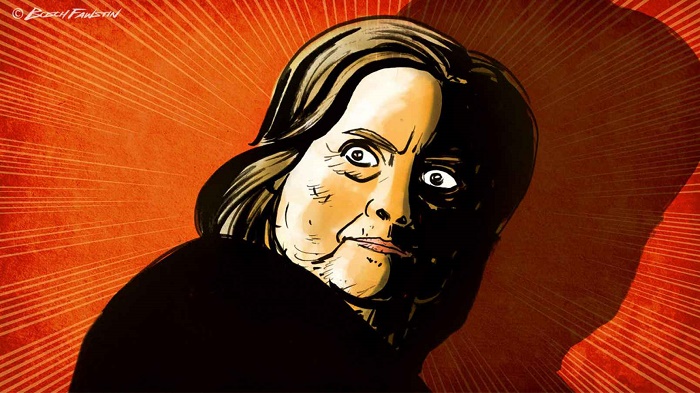 They don’t really like the old white guy with dementia, the Indian princess, and gay Alfred E.Newman. But what about the commie with the heart condition, the chick who slept her way into politics, or New Jersey Spartacus? I think we all see the problem democrats are having with this motley collection of unlikeable unelectable losers, but maybe this is something they should have worked out before now.

Allies have passed around an op-ed that appeared in the San Francisco Chronicle, written by former San Francisco mayor Willie Brown with the headline, "Who should run against Trump? How about Hillary Clinton?"

Supporters say she has been glued to the Democratic primary contest and has spoken with some frequency with Warren and Biden, among others. Now selling a book written with her daughter, Chelsea, she has been a constant public presence of late, engaging in a days-long spat with Tulsi Gabbard, and repeatedly trolling Trump on his favorite communications platform, Twitter.

A late entrance under any circumstances would be difficult, with Clinton's former aides and fundraising network dispersed among many current campaigns. But her supporters have discussed whether she could helm a slimmed-down campaign operation and whether she would be able to maintain the less cautious, more freewheeling persona she has adopted since her loss in 2016.

I think the problem is that there were some plausible but look-alike and unglitzy governors in the mix but they're already dropped out. The process is such that the better-known Senators blocked the view (along with a few flashy extra clowns, Beto, Buttigieg, Williamson, Yang). There's only so much attention we can pay and only so much money. Now,  just as people with lives should be starting to care about an election that's over a year away, it still looks like a crowd, but there's no one in that crowd who seems able to beat DJT.

Trump! The guy who, if you watch the media, is about to be tossed out on his ass by Congress. Congress...... which can't even deliver up one candidate good enough to beat the guy in the normal process. But it's too late now to get a governor. Those characters went down long ago. So the party hacks look around in desperation, and of course, she's there — Ma Clinton.


James Carville, democrat strategist and one of the engineers of Bill Clinton's unseating of a sitting President may be the first Clinton surrogate to have officially publicly lose his mind over the FBI’s decision to reopen its investigation into Clinton’s private email scandal, insisting the  FBI, GOP, and KGB in Cahoots.

Lifezette -  In an appearance on MSNBC on Monday, Carville relentlessly — and repeatedly — attacked the FBI’s decision to reopen the investigation, asserting it is part of a conspiracy to subvert American democracy.


"This is in effect an attempt to hijack an election. It’s unprecedented … the House Republicans and the KGB are trying to influence our democracy.....Comey was acting in concert and coordination with the House Republicans. We also have the extraordinary case of the KGB being involved in this race and selectively leaking things from the Clinton campaign that they hacked.

"It would seem to me that the FBI shouldn't be getting rolled by the House Republicans, that's what happened here....there's nothing else that's going on.....and in the meantime … democracy is under assault by the KGB.  To me that's something we ought to be talking about....."

Apparently the fact that the Soviet security agency was disbanded in 1991 does not preclude its involvement in this vast, anti-Clinton, FBI-organized conspiracy, according to Carville. Poor Carville was clearly apoplectic at the news of Comey’s announcement, describing it as an assault or attack on American democracy multiple times.  Unfortunately for Carville, fanciful tales about time-traveling Soviet spies and an FBI in the GOP's pocket certainly make for interesting entertainment — but they pale in importance to the real-life stories of Clinton's brazen lawlessness.

When the MSNBC anchor dared raise the fact that Democrats were praising Comey only a few months ago when he announced the FBI's decision not to recommend indictment, Carville went into a stuttering, sputtering fit.


"When the facts change I change my mind. Why are you defending this, why are you sitting here as American democracy is under assault? This is an unprecedented event that was done on behalf of the House Republicans. And as we know the KGB is all over this election and this is what we are talking about? We ought to be talking about [how] our democracy is under assault right now and what we are going to do about it, not what somebody said in July about James Comey."