Televisions Been Full of Schiff For Over A Year Now. 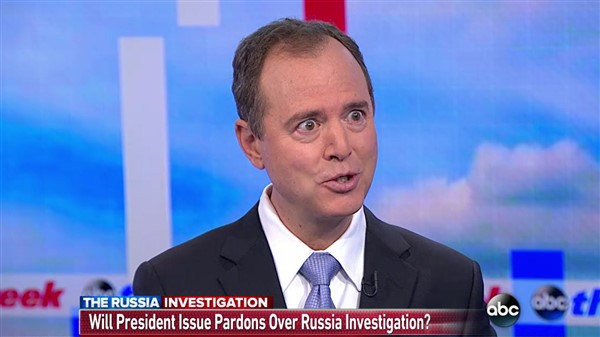 
"The Republican National Committee has just released a study on the Democrat party’s top Russian conspiracy monger Adam Schiff (D-CA)and how he has a rather cozy relationship with the media networks that are determined to remove President Trump from office.

The slimy little prick is the representative for Hollywood and the celebrity Trump haters, something that has not once been pointed out on CNN, MSNBC or any of the other dishonest gabfests that have given this bug-eyed geek a forum to spew his nonsense. The RNC’s report “The Schiff Show” details 227 times that Schiff has given television interviews, a feat that would have been difficult for even an attention whore like John McCain to have matched during his heyday."

According to the RNC Report,  Adam the Lying  Shitweasel, ranking member of the House Permanent Select Committee on Intelligence and Democrat's Minister of the People's Truth, has used the House Russia investigation to becoming a constant presence on cable TV and become the dem's lead propagandist. From January 23, 2017 until February 25, 2018, Schiff  gave 227 live interviews clocking a total of 26 hours, 4 minutes on camera.  He participated in 111 interviews with the geniuses at MSNBC for a total time of 12 hours, 6 minutes, and went slumming 87 times for interviews at CNN for a total time of 10 hours, 59 minutes.

Between television appearances and phone calls trolling the Hollywood pervs back home for campaign bucks, in 2017  Schiff spoke on the House floor a total of 10 times for a total of 36 minutes, and 29 seconds.