Barry and Michelle Come a Visitin'

Today the President and first....Lady flew into the great city of New Orleans to pay us a visit and celebrate the devastation and destruction of the city by his predecessor George W. Bush and that little storm that blew through five years ago. Inconspicuously absent were former Mayor Ray "I'm riding this sucker out in Dallas" Nagan, and former Governor Kathleen "What the hell am I suppose to do about it" Blanco. But all an all it was a star studded show of democrat losers that have managed to entertain most of the country with our political nonsense since reconstruction. 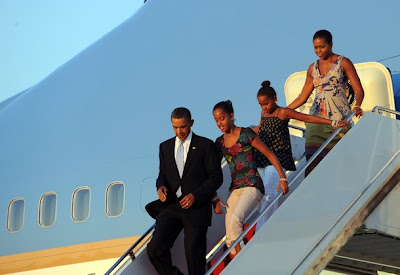 There's our fearless leader demonstrating one of his few
examples of Leadership since taking office,
leading the girls down the steps of Air Force one. 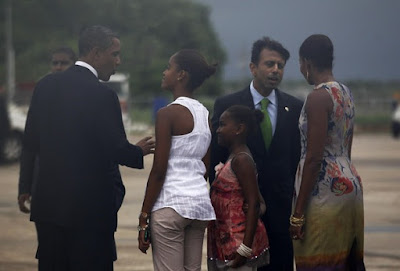 The first bunch is greeted by our most excellent Governor Bobby Jindal.
From the look on the Governor's face I think he's thinking
what most of us are; who the hell is dressing this women? 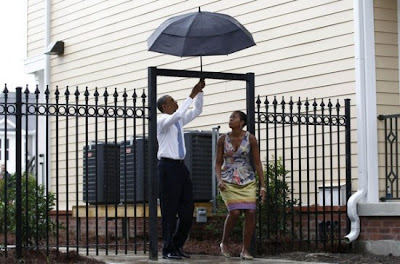 Before his speech at Xavier University, Barry and Michelle visit the
Columbia Pac Development to view newly built homes rebuilt
below sea level and will flood again someday, and will again be rebuilt
with your federal tax money.  Makes ya proud don't it?

Take Note: the Leader of the Free World, Harvard educated and
said to be the smartest man to ever hold the office, can't figure out how
to get an umbrella through the gate to the other side! 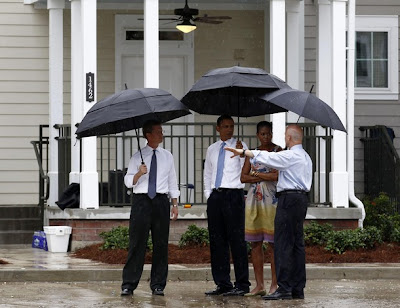 New Orleans Mayor Mitch Landreiu here instructs the President how
to operate correctly an umbrella and maneuver gracefully
even while being distracted by the first lady's dress.


Take note: Group of democrats standing outside in the rain talking
instead of standing inside the building behind them. 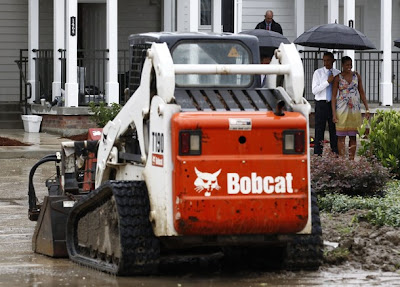 Here Barry and Michelle inspect the bobcat front-loader brought in to
scoop up all the bullshit expected from the president's visit.
By days end, it was said to be well used. 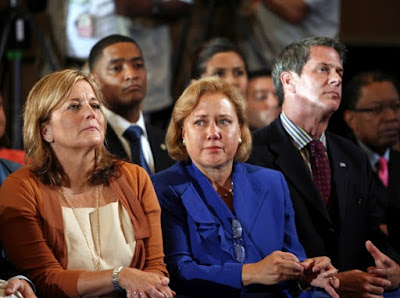 Our honorable Senator Mary "yes I can be bought for a price"Landreiu (D) about to either throw up or pee in her pants during the
presidents speech. The uninterested one to the right of Mary is
our Senator David Vitter(R)  who is probably wishing he had
brought ear plugs and who the hell dresses the first lady. 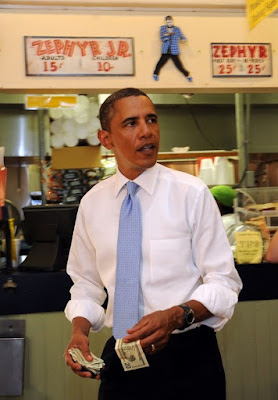 After the speech Barry and Michelle took time to spend some
time with the folks, spread around a little stimulus money and
create a few of those jobs we keep hearing about.*wink wink* 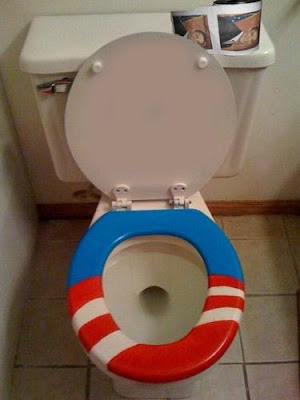 In honor of his visit, we did dress the place up a  bit.
But being a red state, I doubt will see him much anytime soon.

Toilet Paper for Everybody!


Well, the much touted “Summer of Recovery” is coming to an end.  And quite a summer it’s been.

I think this goes without saying, but because I can, I'll say it anyway; this government is fat, bloated, bureaucratic, clueless and out of touch, expensive, unresponsive, and packed to the gills with the worst kind of tax evading career politicians that probably couldn’t pass an entry-level Civil Service exam. 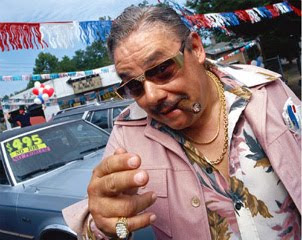 We now have a government  that couldn’t  order toilet paper without 100 hours of Congressional debate (so that even the “I bought me a seat with daddy’s money”  back-benchers can get 30 seconds of face time on TV), a battle royale between the talking heads of each party, complete with a demonization of both sides by their opponents, six or so teleprompter speeches  by “The Chosen One” on how AIG wrecked the toilet paper market, and the New Department of Anal Cleansing Instruments Czar empowered to make up regulations that affect your  person hygiene without  Congressional debate or approval  and  defend you against Big Charmin.


I can see it now; Keith Olbermann having  an on-air aneurysm over the plight of those who can't afford the two-ply and have to make do with the thin single-sheet that very quickly disintegrates and become embarrassing and uncomfortable, and  is outraged it’s not  to be covered under ObamaCare.
And by the time it's all over, the Government will have worked out some new law that promises "free" TP to every filthy tushy in America...by 2021...and requires a tax on "The Rich", a class now defined as anyone who has at least 30-cents and a bottlecap in his pocket (Naturally, Congress will exempt itself from the TP tax). By the time the government actually purchases the TP from the mill in Congressman X's district, which happens to be the company in Which Senator Y Owns Substantial Stock, they will have underestimated the real need by at least half, and paid three times the going rate. And they would have stuff even worse than the One-Ply Wonder, and which probably scratched like sandpaper, and give half the people who used it tumors.
And don't be at all shocked when the government decides it has the right and responsibility to feed your children whatever it deems appropriate. You should know that the obvious reason why kids are fat is beyond the mental capacity of the typical government bureaucrat to comprehend; it is because they sit around all day playing video games and screwing around on Facebook and YouTube. Maybe if our government employees in the Education Dept. would stop meddling in the school systems, and schools would quit teaching them how to engage in sex, and hire a gym teacher, they wouldn't be so round, and we wouldn't need an expensive new tax payer funded "program" to feed kids rotten vegetables at gourmet prices.
So, it should come as no surprise that the people who brought you the Fannie and Freddie debacle, the Mortgage Bailout Program which Failed Spectacularly, who have recklessly spent billions of tax payer dollars ensuring that complete deadbeats can keep a house paid for by someone else's money long after they should have, and which devastated residential neighborhoods with an explosion of foreclosures, should suddenly decide that it knows everything about, and the money to spend, planning the healthy child and their brave new world.
So, when I read that the government can't count, and the people they hired to count for them are a bunch of crooks, I'm not surprised. And when we observe that the President of the United States is basically out of step with two thirds of the country, but still takes a victory lap for something he hasn't done, or worse, for something he's screwed up even more, I'm not surprised.
For me, November can't come soon enough!
.
© Posted By Diogenes Sarcastica™ on 8/28/2010 07:11:00 PM 1 comment:
Labels: Biden, Satire?


Funded? Is there always a diabolical conspiracy when someone disagrees with you? 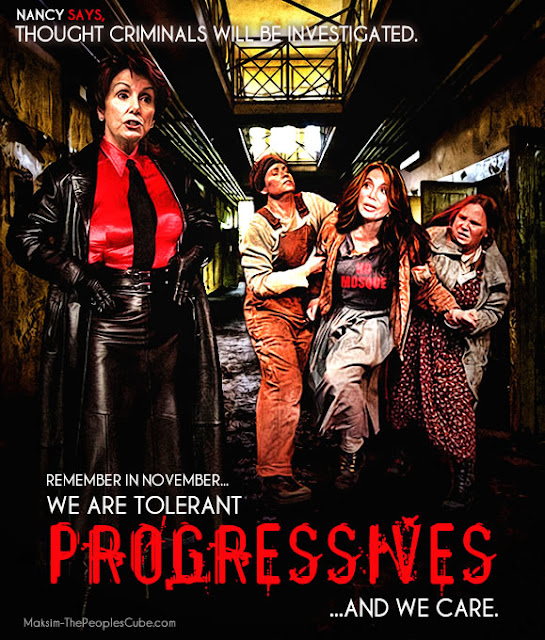 I find it extremely ironic that lefties, after attacking the Exercise of Religion of some groups in the courts for the last 50 years, have all of a sudden discovered the Constitutional protections guaranteed therein.
________________________________

Build the mosque where you wish, it's your right. Just don't give America the middle finger doing it and expect us to not speak up!
© Posted By Diogenes Sarcastica™ on 8/18/2010 09:08:00 PM 1 comment:
Labels: AssHats, Leadership, Political Correctness

Due to continuing bad economic numbers, slow growth in the job market, forecast of weak growth in the private sector during the coming year and a Vice President that stumbles through the darkness with an unlighted candle,  the U.S. Labor Secretary  announced yesterday a cut in Vice President Joe Biden's hours. 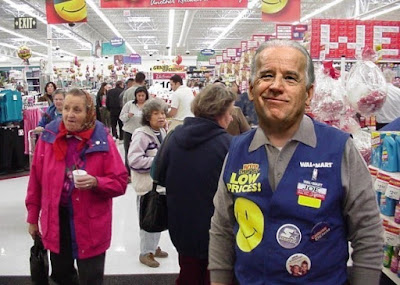 But late Friday,  Biden was spotted eagerly greeting customers at the entrance of the Wal-mart in his home town of  Dover Delaware where he has taken a part-time job.

Local media are quoted as reporting Biden was overheard trying to discuss foreign policy with an irritated and impatient elderly woman who just stopped to ask him where she could find the dishwashing detergent and anti-flatulent products.  Biden told a local  reporter he is proud of his service to the people of Delaware, representing them in Washington, and this part-time job at Wal-mart is no different. "Hey, this is a big f**king deal for ol' Joe, know what I'm  saying?"  the Vice President was heard whispering to the store manager, Kling Phree.

Was There Really Ever Any Doubt?


FBI Releases FOIA File on Liberal Favorite Howard Zinn, Reveals He Lied About Being a Member of Soviet-Controlled CPUSA… 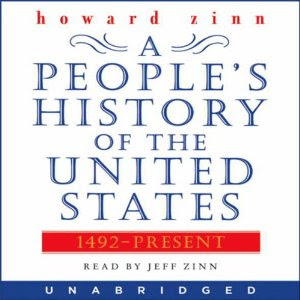 The prominent "progressive" historian Howard Zinn, whose books are force-fed to young people on many college campuses, was not only a member of the Moscow-controlled and Soviet-funded Communist Party USA (CPUSA) but lied about it, according to an FBI file released on Friday.

The file, consisting of three sections totaling 423 pages, was made available on the FBI's website and released in response to a Freedom of Information Act (FOIA) request.

Zinn taught in the political science department of Boston University for 24 years, from 1964 to 1988, and has been a major influence on the modern-day "progressive" movement that backed Barack Obama for president.

Although Zinn denied being a member of the CPUSA, the FBI file discloses that several reliable informants in the party identified Zinn as a member who attended party meetings as many as five times a week.

What's more, one of the files reveals that a reliable informant provided a photograph of Zinn teaching a class on "Basic Marxism" at party headquarters in Brooklyn, New York, in 1951. A participant in the class said that Zinn taught that "the basic teaching of Marx and Lenin were sound and should be adhered to by those present."

Bill Bigelow of the "Rethinking Schools" website said Zinn was "an activist-a socialist, a pacifist, an antiracist, who never strayed from his conviction that humanity was capable of making this a much better world."

That "much better world" turns out to be communism.