Loonies For Carlos: Tweet Weiner and Get a Free Hotdog 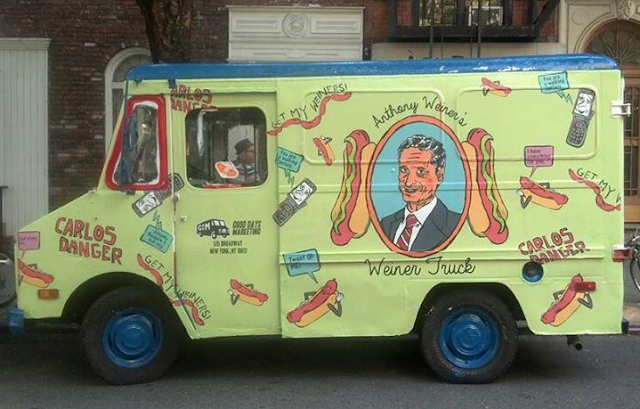 Good Days teamed up with Unruly Heir, their clothing company, to bring you this mobile tribute. The truck is painted with cartoon images of hot dogs and cellphones saying suggestive things, and is tagged with Weiner’s alter ego, Carlos Danger. (Interestingly, when I visited the Unruly Heir website this morning, I was briefly taken to a site hawking Viagra and Levitra.)

The truck is set up so you can tweet at Anthony Weiner, then receive a free hot dog, sort of a modern-day Pavlovian experiment. Unruly Heir states they're not officially affiliated with his campaign. Good Days is just really good at latching on to fads, like cronuts.

The Homo Soldiers of Allah

ISLAMABAD – "Taliban exploitation of young boys for sex is common in parts of Pakistan and Afghanistan, Central Asia Online has learned through interviews with analysts, military officers, clerics and a former militant.

"I have personally done investigative reporting when they were allegedly taking away young boys from schools for sexual pleasure," Peshawar-based analyst and author Aqeel Yusufzai told Central Asia Online in early August. "I've confirmed reports of militants – both in Pakistan and Afghanistan – exploiting young boys."

The militants routinely visit schools in border towns to "select good-looking teenage boys" in Khyber Pakhtunkhwa (KP), Aqeel said. The district education officer reported the matter to the provincial government, then run by the Muttahida Majlis-e-Amal (MMA) (2002-2007), but the problem apparently continued.

A former militant commander-turned-fruit seller in Pakistan confirmed the abuse but told Central Asia Online that the majority of cases go unreported because of "cultural taboos."

"Due to social fear, [the victim] keeps it secret … because in our society, the victim boy is always accused of the act," said the former commander, who identified himself only as Mohmand. "It doesn't matter whether he is forced or if he consented. … Once used, he is then vulnerable to blackmailing and exploitation by others – including commanders or colleagues – for their pleasure."

Some of the abusing commanders would often "proudly share" the act and encourage their peers and colleagues also to "use" the victim, he said.

"Keeping good-looking boys instead of women for pleasure is fashionable [among the militants]," he said......"

......maybe they should build a monument to Obama's contribution. 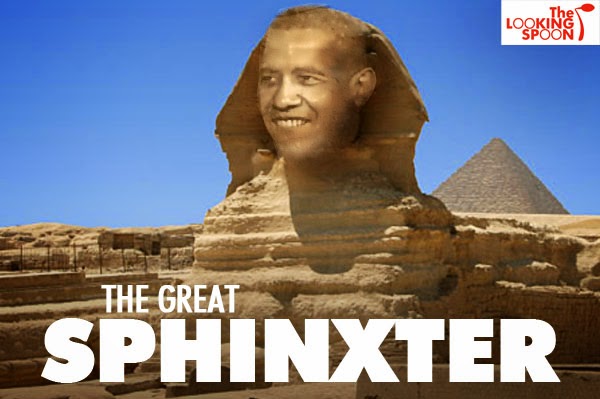 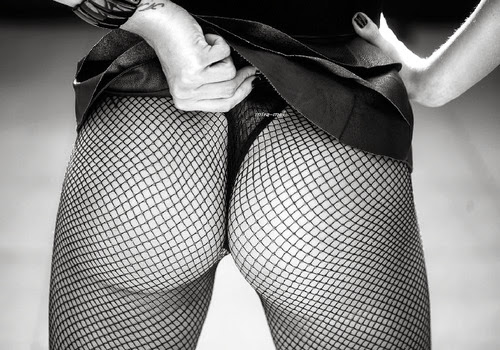 Quite possibly the dumbest thing I’ve ever heard.

Associated Press - The New Mexico Supreme Court is cautioning trial courts and lawyers in the heavily Hispanic state that citizens who don’t speak English have the right to serve on juries — a right enshrined in the state constitution even if people are non-English speakers.

The court issued the admonition Monday in a unanimous ruling that upholds an Albuquerque man’s convictions for murder and other crimes in the 2004 bludgeoning death of his girlfriend and a subsequent armed robbery and stabbing.

Michael Anthony Samora’s appeal argued that his convictions should be reversed because a Bernalillo County judge excused a Spanish-speaking prospective juror who had trouble understanding English.

The Supreme Court said it agrees with that argument but also said Samora’s defense needed to object during the trial but didn’t. The ruling told trial judges and lawyers that they “have a shared responsibility to make every reasonable effort to protect the right of our non-English speaking citizens to serve on New Mexico juries.”

"In the United States, trials are conducted in English. The questions asked by the attorneys are in English, the testimony given by the witnesses is in English, and the judge’s instructions are given in English. There may be instances where a witness simply does not speak very good English, and has to be questioned through an interpreter, and that places a burden on justice, not only for the costs of the interpreter, but on he jury in trying to measure inflection and meaning from a witness’ testimony they may not understand, and can hear only through an interpreter.

But the notion that the state would have to present an entire trial, and every bit of attorney questioning, witness responses, and judicial instructions through the filter of an interpreter? That’s madness. It’s not only unnecessarily expensive, but it would deprive the non-English-speaking juror of the advantages of being able to understand the verbal inflections of the speakers.

Then you have the additional problem of jury deliberations: how can the jury be expected to deliberate amongst themselves, by themselves, if one or more jurors doesn’t speak English?

The judges who came up with this cockamamie decision need to have their law licenses all pulled, because they are just flat f(ornicating) idiots."
© Posted By Diogenes Sarcastica™ on 8/15/2013 07:19:00 PM No comments:

Bryan Texas - A College Station man who told police he was adopted by First Lady Michelle Obama after she contacted him on Facebook was taken into custody following a bizarre incident at a Bryan bank.

Authorities responded to Chase Bank on Boonville Road after an employee alerted police to a suspicious customer Saturday morning. The employee told an officer the man asked to access Obama's account and wouldn't leave after being told there wasn't such an account, according to the arrest report.

The 29-year-old man told officers that Obama let him know about the adoption Friday, so Saturday he was trying to access her bank account, the report states. He stopped talking to police after an officer said he was lying, the documents state.

Authorities ran a background check on Johnnie Gooden and found he was wanted in Brazos County on charges of resisting arrest and assault of a public servant. After police arrested Gooden, they found a bag filled with marijuana in a pocket of his cargo shorts, according to the report.

"The most famous image from the day Osama bin Laden died was taken in the Situation Room, with President Obama, Secretary of State Hillary Clinton and Vice President Joe Biden’s pursed faces clearly in view. But former Obama “body man” Reggie Love painted another picture from that day, too." 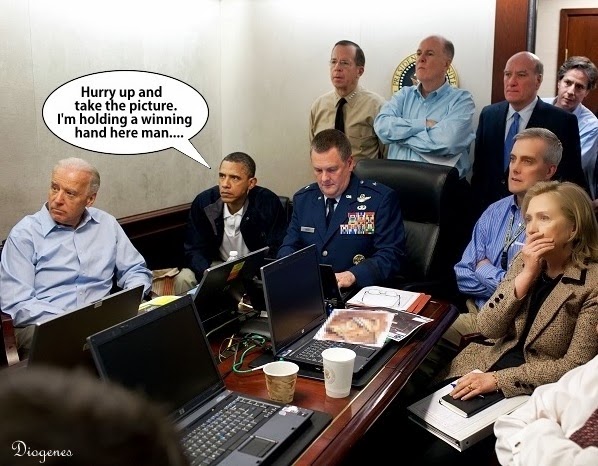 "The POTUS, Love, White House photographer Pete Souza and staffer Marvin Nicholson holed up in the nearby private dining room and played cards. “We must have played 15 games of spades,” Love said.

UPDATE: YouTube thas since pulled down the video of Love's remarks......Interesting.

“We the People” Vs. Insane Utopian Zombies


"If you have come to feel that the inmates are running the asylum, and have the nagging suspicion that you have been, and are being, lied to by your government, entertainment industry, “news” media, politicians, pundits, and darn near everybody else and their cousin, then take heart—you aren’t crazy, they are.

Their insanity is the end result of a long, Byzantine trail of intellectual and spiritual missteps that can be traced back to the Enlightenment and the reason-driven teachings of the philosophes, which in turn led to the philosophical rebuttal of the emotion-driven Romantic movement, and so on through numerous permutations on up to the present day. Connecting the dots between the various associated philosophies, movements, doctrines, and ideologies is no doubt a fascinating journey, but it is not one we shall be embarking on in this article.

Suffice it to say that through centuries of trial and error the left-wing intelligentsia have parlayed a hope-filled optimistic foundation of sanity, morality, Deism, and reason—into a grim, amoral, envious, pessimistic, misogynistic, misanthropic, nihilistic, Godless, senseless mess. No mean feat that. What was bad is now good, and what was good is now bad—this state of affairs is sometimes called the “Luciferian Inversion.”

Be that as it may, it is important to realize that the current Liberal/Progressive agenda is not the result of some fearless search for truth, but the result of a slavish devotion to promoting a predetermined outcome (a collectivist utopia). Clever propaganda and duplicity are zombie collectivism’s stock in trade....."

Could a Beaten Weiner Still Become a Star?

Seems the Anthony Weiner for Mayor troops are making a film of the walking scandal sheet for a possible last ditch appeal in final stretch of the campaign. The New York Post reported that MTV filmmaker Josh Kreigman, who worked as Weiner’s congressional aide, has been following the candidate around, filming and recording every step of the way.

If all else fails and he whithers in defeat, who knows, they could submit it as a resume' to ...oh.... maybe MSNBC. After all, if they would consider giving airtime to a over inflated testicle like Alec Baldwin, why not a world class dick like Anthony Weiner?  He'd fit right in with the rest of those freaks.

NYP - Even if he doesn’t make it to Gracie Mansion, the mayor wannabe could star in a documentary film about his headline-grabbing campaign.

The Post spied MTV filmmaker Josh Kriegman — who is also Weiner’s former congressional district director — filming his every last word on the campaign trail recently. He’s often seen riding with Weiner, and a black mike box has been in Weiner’s back pants pocket for at least two weeks.

Camp Weiner would only say the recording is not for a television commercial — the first of which is slated to air on Monday. The $500,000 pitch follows his recent poll-number plunge in the wake of new revelations about his sexting habit, according to sources. Kriegman does not appear anywhere on Weiner’s recent campaign filings, though he worked for him as recently as 2005. “He appears to be with [Weiner] all the time. He’s been at retail stops, street fairs, forums. I bet he has amazing footage from the past couple months,” said one observer, who is often at multi-candidate events.

The responses to Weiner on the campaign trail have ranged from celebrity-spotting-like squealing to profane heckling."
© Posted By Diogenes Sarcastica™ on 8/13/2013 01:37:00 PM 1 comment:

The Budgetary Success of the Sequester:

"The biggest underreported story out of Washington this year is that the federal budget is shrinking and much more than anyone in either party expected. ...

The sequester is squeezing the very programs liberals care most about — including the National Endowment for the Arts, green-energy subsidies, the Environmental Protection Agency and National Public Radio. Outside Washington, the sequester is forcing a fiscal retrenchment for such liberal special-interest groups as Planned Parenthood and the National Council of La Raza, which have grown dependent on government largess. ...

Liberals had hoped that re-electing Mr. Obama, the most pro-spending president since LBJ, would unleash another four years of Great Society government expansion. Instead, spending caps and the sequester are squashing these progressive dreams. Welcome to the new fiscal reality in Washington. All Republicans need to do is enforce the budget laws Mr. Obama has already agreed to. Entitlement reforms will come when liberals realize that the unhappy alternative is to allow every program they cherish to keep shrinking." — Stephen Moore, Economics Writer Wall Street Journal