When Established Media Types Begin to Speak Openly Like This, There are NO Reasons to Believe Anything News Worthy They Tell Us in the Future


A piece from the New York Times published Monday showed published letters to the editor regarding a May 2 piece from the editorial board titled "Investigate Tara Reade's Allegations." Reade has accused Biden of sexually assault in the early 1990's.

Martin Tolchin, a co-founder of Politico and The Hill as well as a former member of The Times' Washington bureau, wrote in and admitted that he didn't want an investigation into the allegation. Tolchin wrote that this was simply because it could damage the chance to beat President Donald Trump, adding that he didn't even want justice for Reade if her allegation proved true.


"I totally disagree with this editorial. I don't want an investigation. I want a coronation of Joe Biden," Tolchin wrote according to the NYT. "I don't want justice, whatever that may be. I want a win, the removal of Donald Trump from office, and Mr. Biden is our best chance." ...

"Suppose an investigation reveals damaging information concerning his relationship with Tara Reade or something else, and Mr. Biden loses the nomination to Senator Bernie Sanders or someone else with a minimal chance of defeating Mr. Trump. Should we really risk the possibility?"

Day after day in America, the leftist media continues to demonstrate out in the open, with no conscience what so ever, they're willingness to do anything including lie, cheat and open up the the electoral system possible massive voter fraud just to regain power and replace DJT with a Doddering Old Delaware Fool.

This Ladies & Gentlemen is Elite Media Brain Power in Action

MSNBC's Brian Williams and NYT Editorial Board member Mara Gay do the math and conclude that Journalist Mekita Rivas is right, with the $500 million Bloomberg spent on ads he could have given $1 million to every American. pic.twitter.com/S9yWNqxoHN
— Breaking911 (@Breaking911) March 6, 2020

The NYT Editorial Board Couldn't Decide Which Kooky Democrat to Endorse, So They Cut Two Out of The Herd 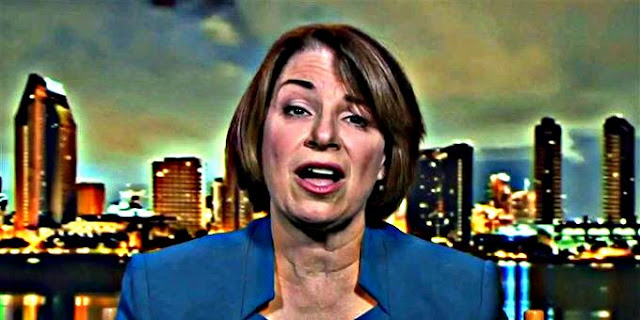 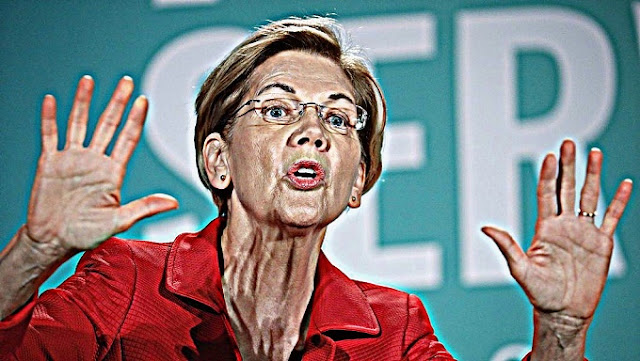 The New York Times editorial board announced Sunday night that it was formally endorsing two candidates to be the best choices for the lone 2020 Democratic nominee to take on evil DJT: Lizzy Warren and Amy Klobuth...something.

Considering the schizophrenic tendencies of the different lunatic visions within the Democrat party these days, choosing candidates from competing wings of the Party, the extreme left progtard wing, Senator Lizzy, and the only slightly less extreme progtard wing, Senator Amy, was probably a easy choice. No white guys up in here!

So, the country is no longer sensible and the we need someone who can kill capitalism. So what's more sensible and destructive then a post-menopausal woman?? Yeah, let's endorse Lizzy, everyone's vision of a self-medicated crazy cat lady, and another who reminds everyone of that one mean school teacher they all hated, and you just knew she secretly enjoyed getting drunk and kicking puppies.

The New York Times has published an article that discovers a new cause for feminist maniacs to rage against. I sometime think the Times has pieces like this all loaded up in the chamber, ready to crap them out when they need to divert the story away from their latest shit-the-bed moment.

we regret to inform you the NYT is at it again pic.twitter.com/WGlH3iKdy0
— Seth Mandel (@SethAMandel) September 17, 2019

Apparently the same thing that happens in their newsrooms. Much of the conversation on Twitter the last four days has been dominated by a couple of women who pooped at the New York Times.


"We may be living in an age where certain pockets of the corporate world are breathlessly adapting to women’s needs — company-subsidized tampons, salary workshops, lactation rooms. But even in the world’s most progressive workplace, it’s not a stretch to think that you might have an empowered female executive leading a meeting at one moment and then sneaking off to another floor to relieve herself, the next."

"The bathroom is saturated with gender in fascinating ways,” said Mr. Haslam, a professor of psychology at the University of Melbourne, who noted that women’s aversion, particularly at work, is not entirely unfounded: One unpublished study he mentions in his book found that a woman who excused herself to go to the bathroom was evaluated more negatively than one who excused herself to tend to “paperwork” — while there was no difference in the way participants viewed the men."

Poop shame is real. In other words, the patriarchy has seeped into women’s intestinal tracts. Let’s just call it the pootriarchy.

COVINGTON, Ky. — On Friday night, all anyone at Covington Catholic High School was talking about was that their star Colonels basketball team had unexpectedly lost to the rival St. Xavier Bombers, 55-45. For the “Colonel Crazies,” as locals call them, identity is wrapped in state championship titles, and their all-male brotherhood.

But by Saturday afternoon, the Northern Kentucky school off the Dixie Highway had been ripped out of its overwhelmingly white, heavily Catholic, and largely Republican world and thrust into a national firestorm that touched seemingly every raw nerve in this polarized country — race, President Trump and the behavior of young white men. - Read More

Some personalities on social media have suggest that the school needs to be burned to the ground with the children still inside (post that have still not been taken down) and many on the Left are refusing to back down from their attacks against these kids.  Instead they have shifted from “disrespecting a native American” to “smug privileged white boys”. This isn’t outrage because of what they saw happen, even if the story was what the media claimed it is. This is an excuse for the Left to assault, humiliate, and outright destroy anyone who has a different opinion than them, even if they happen to be minors......
© Posted By Diogenes Sarcastica™ on 1/22/2019 11:56:00 AM No comments: 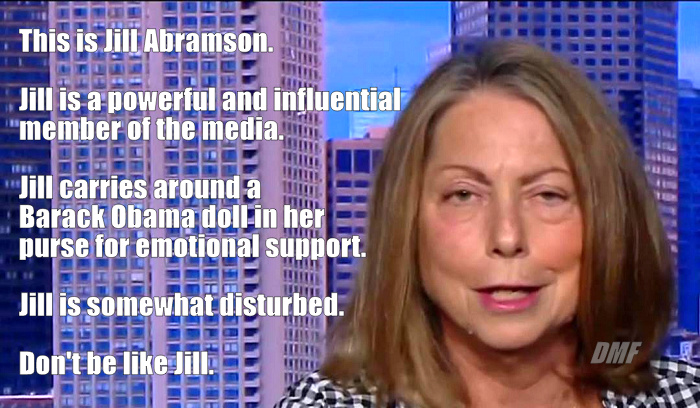 Gee, Ya Think? It’s really never been a secret to anyone with an IQ above room temperature that the American print media have long had a bias they really haven't tried to hide. As the first female editor of the New York Times and author of “Obama: The Historic Journey,” Jill Abramson, was the paper’s executive editor from 2011-2014 until she was unceremoniously booted out of the NYT's Ivory Tower, and as was the 'woke' thing of those days, replaced with a black male. Being a good little leftist soldier that she is, she quietly excepted her station in those gotta be politically correct times.

In a piece she wrote early last year for The Guardian, Abramson fessed up that she has been so distraught by Donald Trump's ascension to the Presidency and all that has come with it, that she carrys around a Barack Obama “therapy doll” in her purse:


"It’s easy to look at what’s happening in Washington DC and despair. That’s why I carry a little plastic Obama doll in my purse. I pull him out every now and then to remind myself that the United States had a progressive, African American president until very recently. Some people find this strange, but you have to take comfort where you can find it in Donald Trump’s America."

But now, despite the mental trauma, even Jill Abramson and some present news analyst can see past the end of her nose and actually admit what can unmistakably be applied to most every news outlet in the land.


A former executive editor of the New York Times says the paper’s news pages, the home of its straight-news coverage, have become “unmistakably anti-Trump.” Jill Abramson, the veteran journalist who led the newspaper from 2011 to 2014, says the Times has a financial incentive to bash the president and that the imbalance is helping to erode its credibility.

In a soon-to-be published book, “Merchants of Truth,” that casts a skeptical eye on the news business, Abramson offers some harsh words for her successor, Dean Baquet. And Abramson, who was the paper’s only female executive editor until her firing, invoked Steve Bannon’s slam that in the Trump era the mainstream media have become the “opposition party.

Though Baquet said publicly he didn’t want the Times to be the opposition party, his news pages were unmistakably anti-Trump,” Abramson adding that she believes the same is true of the Washington Post. “Some headlines contained raw opinion, as did some of the stories that were labeled as news analysis.....”

Needless to say, because of Abramson's sin of truthful criticism, her invites to NY and DC liberal elite dinner parties may just have taken a really big hit.  Bless Her Heart......
© Posted By Diogenes Sarcastica™ on 1/04/2019 04:00:00 AM No comments:

Why I Don't Write Satire Anymore. They Write It for Us.

The New York Times needs your help. We’re looking for false information being spread deliberately to confuse, mislead, or influence voters ahead of the 2018 midterm elections. https://t.co/p3eeW5fnGm
— The New York Times (@nytimes) September 18, 2018

The Comments are Hilarious!