I've just returned from three weeks in “red” America. It was ostensibly a book tour but I wanted to talk with conservative Republicans and Tea Partiers.

I wanted to learn from red America, and hoped they’d also learn a bit from me (and perhaps also buy my book).  But something odd happened. It turned out that many of the conservative Republicans and Tea Partiers I met agreed with much of what I had to say, and I agreed with them.

For example, most condemned what they called “crony capitalism,” by which they mean big corporations getting sweetheart deals from the government because of lobbying and campaign contributions.  I met with a group of small farmers in Missouri who were livid about growth of “factory farms” owned and run by big corporations, that abused land and cattle, damaged the environment, and ultimately harmed consumers.  They claimed giant food processors were using their monopoly power to squeeze the farmers dry, and the government was doing squat about it because of Big Agriculture’s money.

I met in Cincinnati with Republican small-business owners who are still hurting from the bursting of the housing bubble and the bailout of Wall Street. “Why didn’t underwater homeowners get any help?” one of them asked rhetorically. “Because Wall Street has all the power.” Others nodded in agreement. Whenever I suggested that big Wall Street banks be busted up – “any bank that’s too big to fail is too big, period” – I got loud applause.

In Kansas City I met with Tea Partiers who were angry that hedge-fund managers had wangled their own special “carried interest” tax deal.  “No reason for it,” said one. “They’re not investing a dime of their own money. But they’ve paid off the politicians.”

In Raleigh, I heard from local bankers who thought Bill Clinton should never have repealed the Glass-Steagall Act. “Clinton was in the pockets of Wall Street just like George W. Bush was,” said one. Most are also dead-set against the Trans Pacific Partnership. In fact, they’re opposed to trade agreements, including NAFTA, that they believe have made it easier for corporations to outsource American jobs abroad.

A surprising number think the economic system is biased in favor of the rich. (That’s consistent with a recent Quinnipiac poll in which 46 percent of Republicans believe “the system favors the wealthy.”)

The more conversations I had, the more I understood the connection between their view of “crony capitalism” and their dislike of government. They don’t oppose government per se. In fact, as the Pew Research Center has found, more Republicans favor additional spending on Social Security, Medicare and education than want to cut those programs. Rather, they see Big Government as the vehicle for corporations and Wall Street to exert their power in ways that hurt the little guy.

I also began to understand why many of them are attracted to Donald Trump. I had assumed they were attracted by Trump’s blunderbuss.  But mostly, I think, they see Trump as someone who’ll stand up for them – a countervailing power against the perceived conspiracy of big corporations, Wall Street, and big government.

Trump isn’t saying what the moneyed interests in the GOP want to hear. He’d impose tariffs on American companies that send manufacturing overseas, for example.  He’d raise taxes on hedge-fund managers. (“The hedge-fund guys didn’t build this country,” Trump says. “They’re “getting away with murder.”)

He’d protect Social Security and Medicare.  I kept hearing “Trump is so rich he can’t be bought.” Heartland Republicans and progressive Democrats remain wide apart on social and cultural issues.  But there’s a growing overlap on economics.

The populist upsurge is real.

ROBERT B. REICH is Chancellor’s Professor of Public Policy at the University of California at Berkeley and Senior Fellow at the Blum Center for Developing Economies, was Secretary of Labor in the Clinton administration. 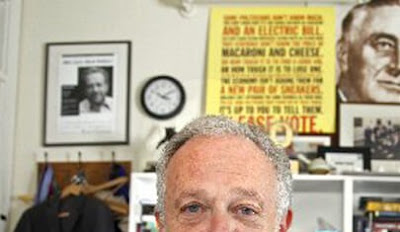