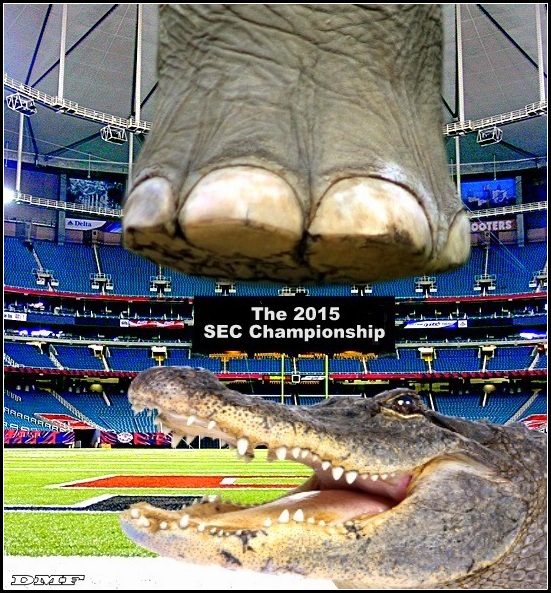 After all the boasting, bragging, trash talk, the bullshit and the expert sports monkey predictions, it's now time for the elite teams to prove who is the cream of the crop.  It's Conference Championship weekend.

When gazing at the teams we see defense that could substitute against all but the best NFL offenses. We see offense that has proved they can outscore the most productive offenses in the country. We also see two of the most balanced teams in college football this year, both undefeated coming into this week. We see surprise teams and perinatal favorites. That said, this is no ordinary week, and anything can happen.

My girly intuition parts are tingling again this week. I Smell upset.

Alabama vs Florida:  Okay. let's face it.  The Gators have been mediocre at most all year. Their much vaunted defense was exposed by an LSU team running on all cylinders to be full of exploitable holes. The Tide should be able to run big on the Gators and not have to worry about their so-so passing game to pull them out. If the gators are even in this game in the 3rd quarter I'll be very surprised. This should be Derrick Henry's Heisman Trophy game.

Clemson vs North Carolina: As I said above, my girly intuition parts are tingling and I'm going against the grain on this one. UNC has, like Oklahoma, quietly and convincingly put away their opponents all year.  While not the strongest of schedules, UNC has looked very good doing it. Clemson is by far the most balanced team in college football and has earned their #1 seed , but I think UNC's ability to make big plays could counter Clemson's excellent defense. I think it's a 3 point game. I'm going with UNC.

Michigan St. vs Iowa: I've thought a lot about this game. Iowa hasn't played the toughest schedule this year, but are undefeated. Michigan St. on the other hand has been inconsistent, but now have their QB back from injury and looked invincible last week.  As much as I'd like to see the Hawkeyes top off a great season, I'm just not convinced they can outplay The Spartans. I kinda hope I'm wrong about this one....