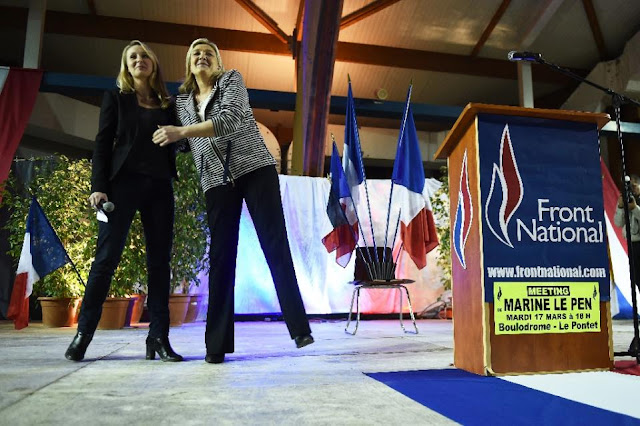 Paris (AFP) - One is a pragmatist: a 47-year-old lawyer by training who has steered France's far-right National Front (FN) from pariah status to mainstream. The other is an ideologue: her 25-year-old niece, a Roman Catholic traditionalist whose easy smile and youthful good looks belie a stance on abortion, homosexuality and Islam that critics say is dangerous or sectarian.

The first round of regional elections placed the FN on track to break the grip of Socialists and conservatives, cementing the party's grassroots' rise across the country. In the Nord-Pas-de-Calais, a rustbelt bastion of the Socialists who rule at national level, opinion-poll estimates gave Le Pen more than 40 percent of the first-round vote.

Victory in the second round on December 13 would give her a springboard for her bid to be president in 2017.

Marechal-Le Pen, meanwhile, also scored above 40 percent in the early estimates for the vast Provence-Alpes-Cote-d'Azur (PACA) region in the south, placing her on course for a landmark win next week.

Many observers believe it is her photogenic niece Marion who is the real ideological heir of Jean-Marie Le Pen, and better placed at a time of crisis to woo electors worried about the nation's future.

And last week, she raised a storm when, in Toulon, a Mediterranean city with a large number of citizens of Arab descent, she said Muslims could only be French "if they follow customs and a lifestyle that has been shaped by Greek and Roman influence and 16 centuries of Christianity."