After How They Got Disgraced...This is just Creepy. 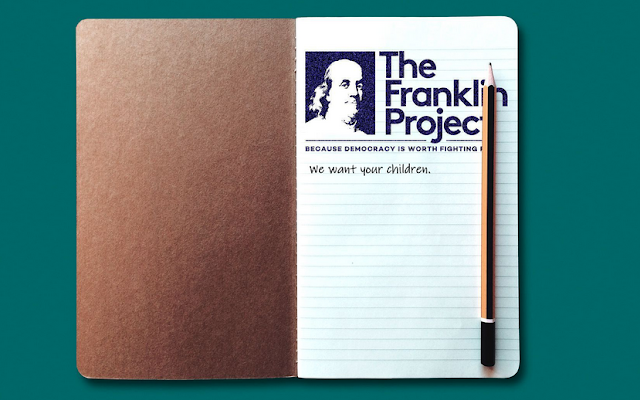 Almost from the very start, The Lincoln Project came across as shady and scummy with something to hide. You may have noticed that you've not seen the Lincoln Lads Rick Wilson or Steve Schmidt shooting the shit on CNN or MSNBC with Don Lemon or Joe Scarborough or Jon Avlon or Nicole Wallace or Brian Williams lately.
The Lincoln Project was the most obvious and glaring fraud in modern history due to the utter gullibility of Liberals and Never-Trumpers. First the group was exposed as grifters funneling the projects money to pay themselves and companies its founders ran, and then came the bombshell pedophile scandal.
It now turns out that an offshoot of TLP known as the Franklin Project is coming on Tuesday and it's aimed at children.  Yes, the grifting pedophiles of The Lincoln Project join in the Left's Poisoning children's education.

America, keep your kids away from the Lincoln Project. https://t.co/LDahz3BSx1

The Lincoln Project, who's entire existence is for their slezzy manner of getting under people's skin, calling out their enemies, and making ads good enough to earn them almost 3 million followers, now want to help children understand Civics and define "civility" in our society.
Does this tweet sound like it comes from the kind of people worthy of lecturing anyone on what civility means, least of all children?

RT if you agree. pic.twitter.com/RJgiezeQVB

The Franklin Project plans to develop and provide a K-12 civics education program it will offer free to local school districts. It also will establish the "Democracy Corps," a hyper-local movement spread across the nation "that will advocate for and amplify the values upon which America was founded. The project does not plan to align with or endorse candidates, offering a true big tent to anyone feeling misrepresented by either major party, or left out of the current political system.  The Franklin Project will be a 501(c)(4) nonprofit. Such so-called dark money advocacy organizations do not have to disclose their donors."
The Lincoln Man-Boy Love Project pedophiles shouldn't be allowed near any child. And anytime some group advocates for "nationwide" anything, indoctrination is replacing education.
[Axios]
[Townhall]
[CBG]
~ Thank You MJA@IOTWReport for the Linkage! ~
© Posted By Diogenes Sarcastica™ on 5/17/2021 06:38:00 PM