Al Sharpton Must Never Have Heard the Old Adage "Better to remain silent and be thought a fool than to speak and to remove all doubt."

AL Sharpton Wants Ivanka Trump Out of the WH

Donald Trump’s daughter Ivanka apparently has an office in the West Wing and will act as a private citizen and consult the President on certain affairs. According to what I've read this is legal, ethical, and is not costing us a thing. Ivanka is not drawing a salary. But For some reason, Al Sharpton, who was Obama’s “go-to guy” on race relations and had unimpeded access to the White House seems to have a real problem with his room temperature level IQ understanding this.


“Giving a office on the West Wing of Ivanka Trump, somebody explain to me how you can give security clearance, access to classified material, and a office to somebody that don’t have a title or job? They say now she ain’t got no title. She ain’t got no role. We ain't payin' her no money. But she can see everything classified.”

First off AL, the office is in the West Wing, not on it.  It's not a roof-top patio, it's an office. As for the security clearance, there are different levels of this. It's unlikely that Ivanka is allowed to see the most sensitive information, but she does need a certain level of clearance in order to consult the president. And I find it hilarious that Sharpton’s biggest problem is that Ivanka doesn't have a job. Sharpton is probably the richest, least employed person in the county, which is probably what he finds so confusing. He doesn't do anything without an extortion big bucks payday.

As ridiculous as this manufactured outrage is, at his heart, Sharpton is a race hustler and managed to insert some racism into this:


“If President Barack Obama had given his daughters or his mother-in-law an office and some access they would have run him and everybody else out the White House."

This is just more proof that Sharpton doesn't understand how things work, like paying taxes or reading off of a teleprompter. 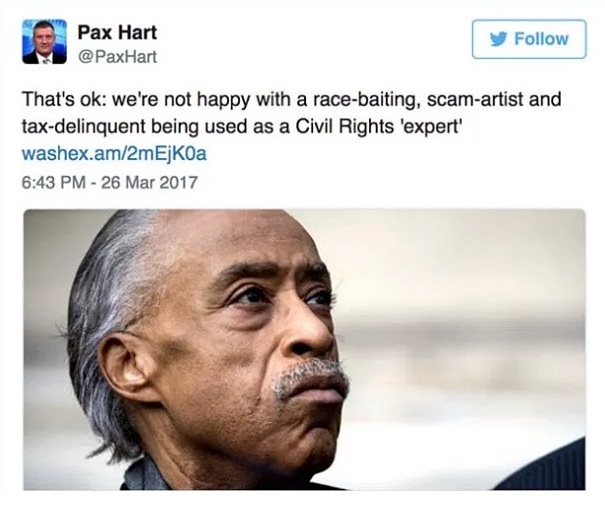