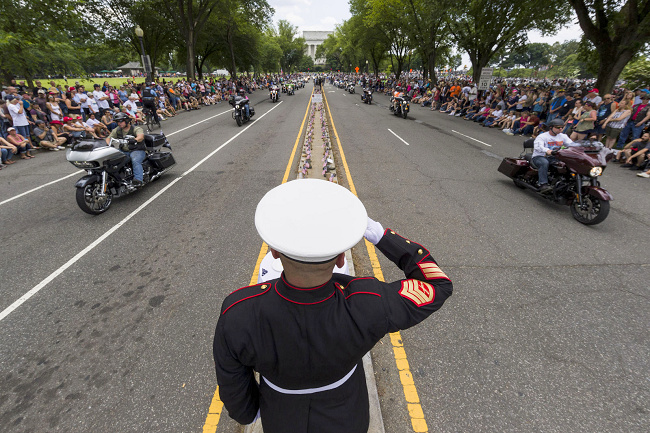 The American Veterans (AMVETS) organization has been meeting at the Pentagon as a rallying point/parking area for their Rolling to Remember motorcycle event on Memorial Day for the past 32 years.  But not this year.  The Pentagon has released a statement denying them a permit, claiming it was due to Covid restrictions.
AmVets is in charge of the event and are a Congressionally-chartered veterans service organization, representing the interests of 20 million veterans.
The Pentagon's denial comes on the heels of the Smithsonian announcing last week that it will reopen eight of its facilities to the public in May, starting with the National Air and Space Museum’s Steven F. Udvar-Hazy Center in Chantilly on Wednesday, May 5.  Additional museums will open this coming Friday, the United States Holocaust Museum announced that it plans to reopen on Monday, May 17, and the National Zoo on May 21.
So just to make clear, they’re denying veterans the right to assemble in a parking lot, outside, during the day, where they’ve gathered for 32 years.
Least we forget, Joe Biden just held a photo op / political rally outside in Georgia. Can someone explain to me the difference? Why is that event just cool with the Biden, yet this one isn’t? Are they trying to say that the veterans who protected our country aren’t responsible or aren’t worth as much respect as a Biden political rally?
~ Thank You WHATFINGER NEWS for the Linkage! ~
© Posted By Diogenes Sarcastica™ on 5/02/2021 08:01:00 PM