The Iron Lady Shall Live On

"She has the mouth of Marilyn Monroe and the eyes of Caligula."
President Mitterand of France

Hollywood is not known for sympathetic portrayals of political figures, often injecting rumored or unproven incidents and fictional conversations. So when a left-wing Hollywood star sets aside her dignity to portray a right-wing heroine, odds are the result will irritate everyone. But surprisingly, 'The Iron Lady' is far better than I ever expected, particularly given that virtually the entire entertainment community from the east coast to Hollywood is liberal, a bias gleefully acknowledged by Meryl Streep, who gives an convincing performance as three-term British prime minister Margaret Thatcher. “I'm an actor and, you know, politically we're all on the other side.” 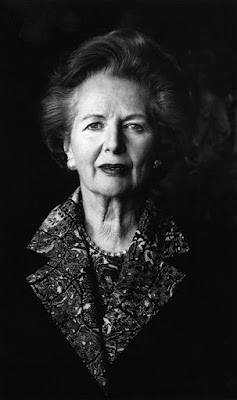 When Margaret Thatcher was first elected to Parliament in 1959, she entered a House of Commons that had 630 members, of whom 25 were female, which is about 24 more women than you would think were ever in any House of Commons during her political life should you see The Iron Lady. The filmmakers have resolved whatever dilemma they had with Mrs.Thatcher as heroine by presenting her life as a feminist struggle. There are no other visible female members of Parliament, only a sea of men. Being female was a liability, although class was the greater obstacle for Thatcher. She was so very lower middle class, a grocer's daughter who never quite lost her regional accent, never mind her chemistry degree from Oxford and her successful studies as a tax lawyer.

The framework of the film is Mrs. Thatcher in her declining years. She appears to have multi-infarct dementia, a decline of memory and intellectual faculties caused by tiny strokes, and believes her husband Denis to still be alive. One of history's ironic gifts to the left is that their greatest opponents, Ronald Reagan and Margaret Thatcher, both after leaving office suffered from a mental disease. Nothing in the film tries to derive any advantage from this, but the choice to play out her extraordinary life over three days of this decline, after she had ceased to be a public player, is telling when you consider other legitimate angles that might have been chosen.

The year before Thatcher became prime minister, the country was in chaos, the dead unburied, doctors on strike, no bread one day, no newspapers the next. Thatcher reshaped society with secret strike votes for unions, privatized industry (except for the health service and the BBC) and lower taxes, which under the Labor Party could be as high as 98 per cent. She stood her ground and never flinched. Thus her great quote that doesn't make the film: “To those waiting with bated breath for that favourite media catchphrase, the U-turn, I have only this to say, ‘You turn if you want; the lady's not for turning.

The film gives a moving glimpse of Thatcher's middle-England pillow-plumping kindness as she worries about Denis. She was the Iron Lady in power suits and evening gowns, even as she played a pivotal role in defeating Communism. But she remains more: a kind woman who forever overlooked the cruelty of her own children toward her and the cruelty of the world's caricatures. Now in her final years, she concentrates on small acts of kindness, real or imaginary.