The Man Who Scares The Hell Out of the Left

The song may say you only hurt the one you love, but in politics you hurt the one who gives you nightmares and Marco Rubio makes democrats wake up in the middle of the night in a cold sweat screaming at the top of their progressive lungs. Anybody who articulates conservatism as well as Rubio, who ties it to the American dream and presents it as the best hope for the average Joe in this country would frighten the Democrats. Rubio however, has two other significant and fear inducing things going for him. 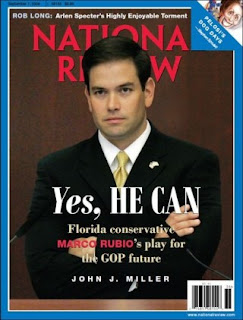 First of all he is of Cuban decent, and being Hispanic means (to liberals) he is supposed to be on the their side. Progressives like to place people in groups, it makes it easier for them to take away their humanity and individualism. By destroying their neat and pretty picture of an Hispanic, Rubio scares the progressives.

Rubio's other threat is that he lives in a swing state with 29 electoral votes, 11% of the total needed to become president (270). Obviously that is a major chunk of electoral college votes (that went to Obama in 08 & 2012).

Put it all together and one realizes that the progressives are "scream for mommy in the middle of the night" frightened about the Florida Senator, which is way beginning with last October rumors began to spread about him that he wasn't really a "natural born US citizen."

It is the contention of these nut-jobs that because Rubio's parents were not yet Citizens of the US when the future politician was born, he is not a natural born US Citizen.

Now the Democratic smear machine is making hay about the fact that Marco Rubio used to be a Mormon. Rubio was baptized into the Mormon church when he was 8 and “remained active in the faith for a number of years,” attending LDS youth groups and walking to church most Sundays. Rubio left Mormonism to become a Catholic “a few years later,” and he got his first Communion when he was 13, in 1984.

Just like the "natural born citizen" questions raised ,the real issue is the thought of a conservative, Cuban-American from Florida on a GOP ticket gives the progressives nightmares. Just as they tried to do with Sarah Palin four years ago, the progressives are going to do their best to destroy Marco Rubio. The question is, will we let them!