Even Ex-Commies Know Krugman is a D**K 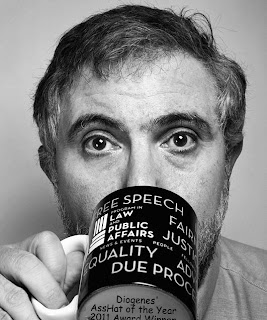 The ex-Soviet satellite state of Estonia is home to slightly over a million people and is smaller than Vermont and New Hampshire combined. Yet in the contentious debate between “austerity” and “stimulus”—i.e., ceasing to spend far more than you have versus further indenturing your citizen-vassals for generations—it’s becoming the mouse that roared.

A few facts about the thumbnail-sized Baltic nation:

• In a 2006 State of World Liberty Index review of 159 countries based on “economic and personal freedoms,” Estonia ranked first.


• As of 2010, it boasted—by far—the lowest debt-to-GDP ratio of all countries in the eurozone.

• It’s the eurozone’s only country to report budget surpluses for two years running.

• Its economy is growing faster than any other nation in the EU.

Estonian austerity (Esterity?) programs, as well as the fact that the country has adopted a Friedmanesque flat tax since 1994, would seem to be responsible for at least a few of these glittering statistics. Yet this is highly uncomfortable for economists who make their living by urging statist intervention and deficit spending.

When it seemed as if Estonia was bouncing back from a deep recession by using policies that statist economists insist would only drive countries deeper into economic despair, Nobel laureate and New York Times columnist Paul Krugman called the country the “poster child for austerity defenders” and saw fit to pee on their parade last week.

Bane of anti-globalists and a self-described “unabashed defender of the welfare state,” Krugman was critical of Obama’s initial stimulus plan only because he said it was far too small. He has likened European austerity attempts to a “medieval doctor, you're sick so he bleeds you, you get even sicker he bleeds you some more.”

Apparently unbeknownst to Krugman, the same metaphor could be used to describe extracting further tribute from already stressed taxpayers.

After Krugman pooh-poohed the recent successes of the diminutive nation known as the “Baltic Tiger,” bow tie-wearing Estonian President Toomas Hendrik Ilves (pronounced “ILL-vis”) took Krugman to task on Twitter. Ilves left the following string of posts in what some are suggesting was a drunken rage on June 6:

"Let’s write about something we know nothing about & be smug, overbearing & patronizing: after all, they’re just wogs…."

"Guess a Nobel in trade means you can pontificate on fiscal matters & declare my country a “wasteland”. Must be a Princeton vs Columbia thing."