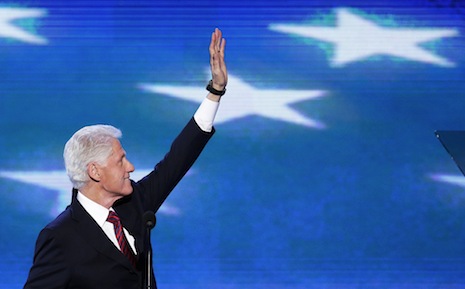 Former President Bill Clinton apologized last night for reading what he called “a severely abbreviated” version of his Convention speech, saying that he had planned to read a “very educational and interesting” nine-hour version but lost his nerve.

“I don’t know what happens to me when I get up in front of a crowd like that,” he said. “I kind of tighten up and feel the need to rush through things.”

Mr. Clinton said that the longer version of his speech “was packed with good stuff,” including a detailed proposal to fix the United States Postal Service, an elaborate discussion of America’s fisheries and waterways, and a complete recitation of the Fleetwood Mac back catalogue.

As it was, the shortened version of his speech was interrupted by standing ovations many times, including for his reading of a section of the Manhattan phone book.

Mr. Clinton acknowledged that his speech went over well with its intended audience of diehard Democrats, who responded with many congratulatory e-mails and over twenty thousand proposals to get laid.