Obama to Apologize to Nation 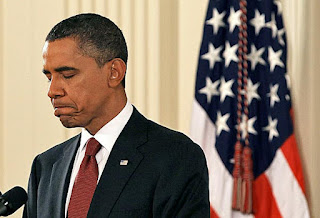 Washington - Middle Finger News has learn that apparently the White House has made plans for a  "preemptive strike" before the Presidential debates on what GOP nominee Mitt Romney has dubbed the president's affinity for apologizing for America. Barack Obama will officially apologized to the citizens of United States in a televised speech for being such an asshole as a way of taking the issue back.

"I feel truly sorry that the right is so desperate to remove me from office that they have unleashed  Mitt Romney on the country" said Obama in a prepared statement released by the White House. "I can't help but feel some personal responsibility, and for that I am also sorry for too."

Obama hinted at the statement yesterday, apologizing to a crowd in Wisconsin yesterday for his "outright assholery." "Believe me, no one feels worse about this being an asshole than I do," said the president.

It was widely suspected that Obama was an asshole by many from the time he entered the 2008 presidential race, saying, "In this time of war, I simply cannot let my campaign be a part of aiding a surrender to terror ", then going on to apologizing to the Arab world after being elected.  "Can you believe this asshole?" said Hillary Clinton at the time.


I am so sorry you have had to put up with my assholery these last three years, Obama will reiterated  in his speech to the nation. I will do better in my next term, I promise.


When the news of the apology was leaked to MSNBC commentor Chris Matthews he said "Did Ronald Reagan admit he was an Asshole? NO! Did George Bush admit he was an asshole? Hell NO! How could you not admire the President for such a admiral move as this?" CNN commenter Anderson Cooper told us " I've seen many  assholes over the years and the president is putting his ass in a very uncomfortable position for the sake of the country and his presidency. It's a bold move I'd like to see."

As far as we know, there are no plans at this time to apologize to the country for Joe Biden.