Upon a visual inspection of the suspected enemy aircraft from a nearby CIA drone, General Alfred ‘Bootsy’ Moaters ordered the target to be shot down, making this encounter the first Taliban dogfight with an American fighter aircraft so far in the war. Described as an advanced Iranian design, and possible Chinese manufacturer, the single-seater was hit by a burst of 30mm cannon fire. 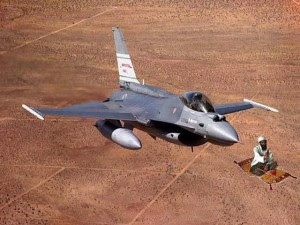 After being noted for fighting from caves and for using women and children as shields, the latest Taliban attempts at seizing the strategic air initiative failed miserably after pilot Ali Mohammed took several 30mm cannon shots to his aircraft.  Within moments the craft fell from the sky.

Lt. Colonel Amos McKinney is credited with shooting down the enemy craft. During the debriefing after the engagement,  McKinney said the ill-fated Taliban pilot briefly deployed his baggy pants in an attempt to parachute safely to the ground, but an over abundance of heavy AK-47 magazines caused the pants to rapidly deflate, dashing his chances of a safe landing. Mckinney said "those flag burning rat bastards are gonna have to get up real early to get one pass the U.S. Air Force."

The Taliban craft was recovered by US Special Forces and, after dry cleaning and patchwork on several of the holes, will be on display on the floor in front of General Moater’s desk.