Bin Laden Peels Off a Few Bucks for the Obama Campaign

No block to foreign money – not even from dead terrorists.....

The “Bin Laden” donations, actually made by WND staff, included a listed occupation of “deceased terror chief” and a stated employer of “al-Qaida.”

“Bin Laden” is currently set up on the official campaign website to contribute more to Obama’s campaign. The name is also registered as a volunteer. Since the “foreign” contribution was sent, “Bin Laden’s” email address has received several solicitations from Obama’s campaign asking for more donations.

The apparently foreign-based contributions were conducted as a test after a flurry of media reports described the ability of foreigners to donate to the Obama campaign but not to Mitt Romney’s site, which has placed safeguards against such efforts.

The acceptance of foreign contributions is strictly illegal under U.S. campaign finance law.

One $15 donation was made at BarackObama.com using a confirmed Pakistani IP address and proxy server. In other words, as far as the campaign website was concerned, the donation was openly identified electronically as coming from Pakistan.

Upon clicking the “donate” button, WND staff selected the $15 amount and were taken to a page on the campaign website asking for a first and last name, city, state, zip code, email address and phone number.

While the website only has options for U.S. states and zip codes, there is no mechanism in place on Obama’s website to verify the individual is actually located in that state or zip code, or even in the U.S.

In the case of this donation, the 91101 zip code is real but corresponds to Pasadena, Calif., and not Abbottabad, the Pakistani city in which bin Laden was found holed up in a compound.

For a requested phone number, WND inputted the White House information line of (202) 456-2121. The email address used to set up the donation account was osama4obama2012@gmail.com.

After clicking “next,” the website asked for an employer, occupation and a password to set up future donations. WND staff entered the occupation as “deceased terror chief” and the employer as “al-Qaida.”

The transaction was made last Friday with the use of a disposable credit card. The website did not require the card’s security code. 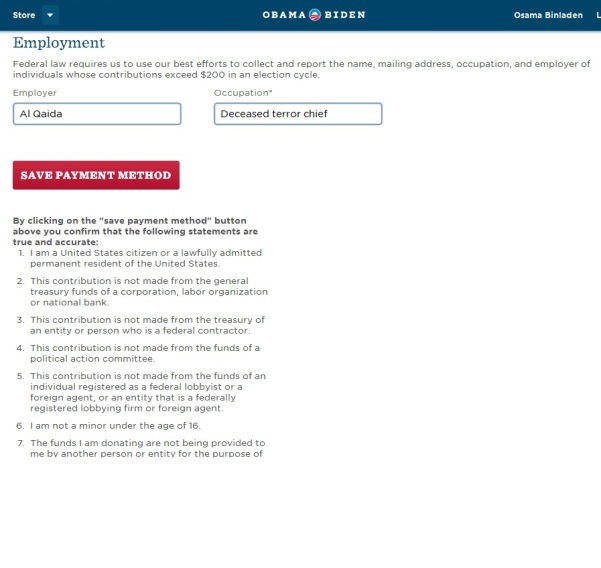