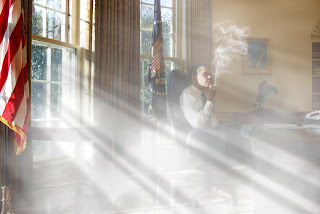 With the second Presidential debate just one day away, President Obama has been working intensively on two skills that eluded him in the first debate: talking and thinking.

According to one aide, much of the Presidents debate preparation has involved rehearsing a slew of prepackaged “zingers,” with mixed results: “We gave him what we thought was a foolproof line about the budget deficit and he somehow turned it into a crack about Paul Ryans workout pictures.” Reportedly, Obama's practice debates have gone worse than expected, with the President getting trounced by a variety of opponents, including a Secret Service agent and his Apple personal assistant Siri.

At a campaign appearance in Ohio today, Michelle Obama attempted to lower expectations for her husband's performance at this Tuesdays debate: “When Barack starts working his mouth and goes off on some weird tangent about who knows what, please just tune him out. God knows that’s how I’ve survived all these years.” The President also downplayed his debate prospects, telling supporters: “Mitt Romney could very well be the greatest debater I've ever faced. He’s Abraham Lincoln, Clarence Darrow, and the Roman orator Cicero put together. Next to that silver-tongued rascal I could very well sound like someone with a head injury, or like Joe Biden.”

Later in the day, the White House released a statement apologizing to people with head injuries.