I have no idea how you did it but you managed to give your man another term. All of the polls, the campaign attendance numbers and the majority of people who get paid to watch these things all pointed to a Romney victory last night but somehow you pulled it off. No small victory there so, I will say, I am impressed.

Have you thought about how the Muslim Brotherhood is going to increase their presence, power and influence throughout the Middle East now that they know that we won’t be there to slow or stop them and, in fact, have allies in Washington who support them? Are you ready for a nuclear Iran?

Are you prepared to see small businesses close their doors, to watch as friends, neighbors and strangers lose their jobs? Have you thought about what you’re going to do when loved ones need life-saving medical treatment but get denied because some Washington appointed bureaucrat decides it isn’t cost effective? Have you considered how our country is going to be pulled even further apart along racial and class lines? Are you prepared for war? Are you ready to see our allies abandoned and killed as they try to defend themselves against a ruthless, conquest seeking enemy?

I doubt you are.

You reelected a man who has a history of lying, corruption, disregard for the things he took an oath to protect, who has advocated for our enemies and provided them aid and comfort. You reelected a man who is indecisive, is willing to turn his back on allies and promotes racial and religious conflict within our own country as well as the world. You reelected a ‘Nobel Peace Prize” winner who has sent American men and women into more conflicts that almost any President before him and has complete disrespect and contempt for those same men and women.

And when they don’t just remember, you’ll have no one to blame this time other than yourselves. Bush is long gone and can no longer be your scapegoat. When these things come to pass and you want someone to point at, someone to blame, just look in the mirror.

But, again, congratulations. I hope you get everything you deserve.

To the rest of us-exciting times are coming.

Stay awake, be vigilant, prepare and be ready. 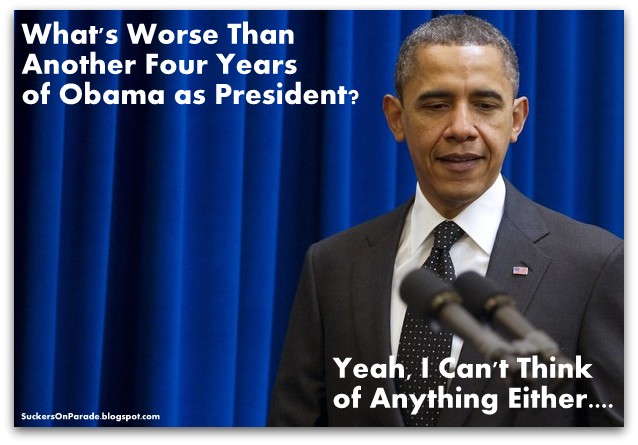