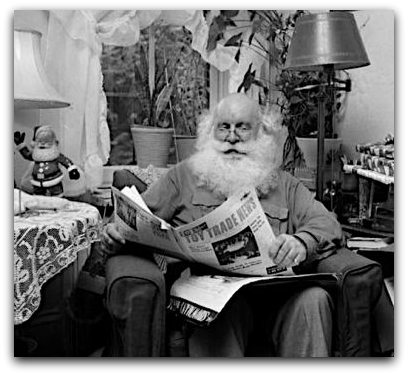 It is reported today that leading Democrat House and Senate members are calling for an congressional investigation of North Pole Businessman and Philanthropist,  S. Claus, on allegations of a possibly conspiracy with American Retailers such as Wal-mart, Target, Macys and many others involving profiteering.

House Minority Leader Nancy Pelosi (D-Cal) accused Mr. Claus of conspiring for years by way of a made up holiday to enrich himself as well as already wealthy retail and related industry CEO's.

"This conspiracy involves duping small businesses and households to spend their already stretched resources, money that could be otherwise used to support a government the people want and demand." Pelosi announced. "This is Big Business Trickery and Greed at it's worst and we plan to pressure congress to look into it throughly."

Even more egregious accusation were leveled at Mr. Claus by Homeland Security Secretary Janet Napolitano . "For years NORAD has monitored Mr. Claus Violating United States air space without notification, permission or any attempt at communicating his intent. He is widely known to covertly penetrate restricted areas such as Air Bases, Military installations and even the White House at times in the dead of night."  Napolitano  added "we cannot have people just breezing across our sovereign borders without permission. He's damn lucky some fly boy hasn't shot his ass out of the air!"

Although not a resident of the U.S., an Equal Opportunity Commission Spokesman addressed discrimination concerns about hiring practices at Mr. Claus foreign headquarters by stating Mr. Claus seems to hire exclusively low wage, non-union small people to slave away day in and day out at his manufacturing operations. "We find this disturbing, a trend common in the third world."

Representative Sheila Jackson Lee (D-Tex) also expressed concerns "about this White Christmas thang" and over Mr. Claus conceived racist tendencies by the constant use of the phase "Ho-Ho-Ho". Congress person Lee asked "Where does this fat ol' white man get off goin round callin people Ho's anyway?"