It's Time We Ban All Holidays 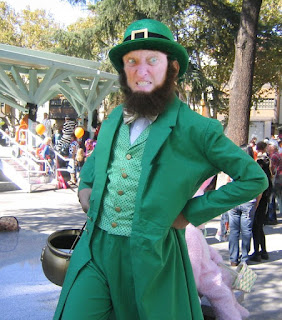 "This past week I read several news articles that just proves to me what I've been feeling for many years now: All holidays should be banned for the good of this country. Holidays are oppressive remnants of an evil bygone era, long overdue to be banned. I'm sure all will agree that it is high time we took a look at the institution of holidays and think about giving that up. Let me go through a partial list of holidays in the US to show what I mean:

New Years Day - This celebration is completely insensitive to those non-Julian calendared individuals in our country. We can no longer support a day that just isn't new years for Jews, Muslims, or the Chinese. Besides, having wild parties in the middle of the night at Times Square is downright dangerous and unhealthy.

Martin Luther King Jr. Birthday - Originally based on the ideal of civil rights, this holiday is a reminder of White oppression and the evils of slavery. Since we no longer want anyone to feel bad around the celebration of holidays, we must also get rid of this one. It also neglects to celebrate the diversity of all people of color, for example, excluding Hispanics and Asians. Gays are not represented either, especially in light of the modern idea that gays are the "New Black."

Mardi Gras - At first glance, this holiday seems innocuous enough, representing the average American values of debauchery and overindulgence. However, we can no longer support a holiday that takes place in New Orleans. This city was destroyed by Hurricane Katrina, which, as we all know, was Bush's fault. We must not support any holiday associated with George W. Bush.

Valentine's Day - Of course, this is the celebration of St. Valentine, a religious figure, and should be given up since it is offensive to any non-Catholic. It is also a reminder that gays have been legislated from their freedom to express love, apparently in any way, shape or form. The non-romantic in this country take exception to the idealization of romance and want nothing to do with it and should not have romanticism and love shoved in their faces.

President's Day - At the outset, this looks like a good idea until you realize that we are also celebrating George W. Bush who was President of the US. No one really wants a holiday that celebrates Bush. If Clinton had only been allowed to stay in office, we could probably keep this one holiday, but alas, Bush has ruined it for everyone.

April Fool's Day - All but gone anyway, the practice of playing practical jokes on anyone is insensitive, unfunny and should be made criminally illegal with stiff jail terms and fines imposed.

St. Patrick's Day - A Catholic throwback that should best be ignored. Making everything green in its celebration denies the diversity of color. We might, perhaps, consider a Rainbow Beer day instead, but beer will soon be illegal since it causes obesity and drunk drivers.

May Day - A holiday based on the mass destruction of earth's natural resources by cutting and killing millions of innocent flowers is completely unconscionable. We should never agree to any holiday that contributes so drastically to global warming.

Cinco de Mayo - This isn't a real holiday in Mexico either, but an excuse to get drunk and cause traffic accidents. It should have been banned years ago.

Mother's Day - This insensitive celebration doesn't even consider the many women who cannot have children, or choose to abort them. Men, also are excluded, which at the outset may seem like a good thing until you realize that some gays are men as well.

Independence Day - This is merely a celebration of some old, fat, white guys making other old, fat white guys angry and starting a war that killed lots of innocent people. We also need to consider that fireworks are inherently dangerous and need to be banned. Personally, I'm tired of trying to find new ways to decorate using red, white, and blue as the only possible colors.

Labor Day - When we have a holiday that reminds us that we should all be working, we're not being fair to the myriads of people depending on the US welfare system for their support. We could conceivably stretch this particular holiday to include welfare recipients, and call it Nanny State Day or some such, but alas, there are still people who insist on working for a living and ruining it for the rest of us.

Hannukah - Lighting candles in your house or apartment is dangerous. It's best if we forget this holiday for the safety of all.

Christmas - The grandparent of all oppressive religious holidays, this is a reminder to atheists around the country that "we are all going to hell if we don't bow down to Jesus." Its traditional values of peace on earth, goodwill towards men has absolutely no place in our modern, secular society. No such religious sentimentality should be forced on anyone. Gift giving and being nice to others also has no business being enforced by the religious right. Christmas contributes to widespread deforestation, light pollution, mall traffic, and global warming. It remains the most unhealthy time of the year as heart attacks and suicides increase. Santa Claus is a silly myth and superstition that should never be imposed on anyone, let alone on unsuspecting and innocent children. Wal-Mart workers would certainly be safer without it.

There you have it. A lot of problems in the US would go away if we would stop being so selfish and just give up our holidays. Ill feelings would melt away as the ear of a chocolate Easter bunny in the mouth of a three year old.