The Cowardly Lion of the Senate 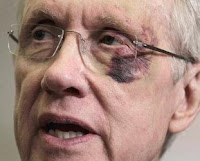 "In Mr. Reid's Washington, the House works its will, the Senate does crossword puzzles. Its committees do not produce bills, its senators do not debate or amend, the body does not vote. The House, to accomplish anything, is forced to engage in backroom wrangling with the White House, the results of which are presented to the nation as a fait accompli. The Senate claims total deniability. ...

Mr. Reid's primary motive is to shield his vulnerable members from tough votes and to hide the huge divisions in his party.

"He does not want a debate on gun control, as it would force Democratic senators to choose between President Obama and their own pro-Second Amendment constituents. The majority leader would not offer a bill during the fiscal-cliff negotiations because many Democrats disagreed with their president's proposed tax hikes. He has not produced a budget because to do so would expose the party's real spending ambitions, which would create political problems back home for his members." — Kimberley Strassel, Wall Street Journal