How embarrassing for the Obama Administration: Jimmy Carter Goes on Hostage Rescue Mission 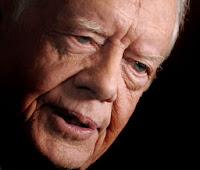 America’s most disliked former president is planning yet another step onto the international stage – this time heading to North Korea to negotiate the release of an American citizen Pyongyang accuses of working to overthrow the government, according to Reuters.

Fortunately for the man being held, a missionary named Kenneth Bae, Jimmy Carter has a good chance of getting him out. He did something similar in 2010 for a Boston native being held in North Korea for illegally entering the country. The North Koreans – like most countries that despise the United States (Venezuela, Cuba, Syria etc.) actually think Carter’s a great guy.

Unfortunately for the United States, there’s a good chance Carter will say or do something embarrassing to the rest of the country – kind of like he did on a daily basis from 1977 to 1981. (And as he’s been doing regularly ever since America’s voters ended Carter’s administration of malaise by trading one of the worst presidencies in history for one of the greatest.)

Here’s a rundown of some Carter classics, just from the past 10 years:

July 19: “America has no functioning democracy at this moment.”Actually, Carter hasn’t been fond of American democracy since it proved itself on Nov. 4, 1980.

February, 2012: The Occupy Movement has been “relatively successful, even acknowledging there’s no leadership, there’s no coherence and there’s no single list of issues they want to succeed.” Carter is an expert on matters of “no leadership and no coherence.”

Sept. 10, 2011: “We kept our country at peace (during his administration). We never went to war. We never dropped a bomb. We never fired a bullet.” Letting 54 citizens be held prisoner and getting embarrassed on the world stage by a mob of beggars in Tehran for more than a year and not doing a damn thing about it isn’t something to brag about.

September, 2009: “I think an overwhelming portion of the intensely demonstrated animosity toward President Barack Obama is based on the fact that he is a black man, that he’s African-American.” What other myriad of reasons could there be to dislike Carter’s philosophical successor?

April, 2008: “My country, the political arena of my country, is almost 100 percent supportive of the Israeli position. You never hear any debates on both sides much. … They have laid down a rule to which I consider myself immune that … nobody can talk to Hamas, nobody can talk to Syria.” Jimmy Carter, our apostle to the Syrians.

May, 2007: “I think as far as the adverse impact on the nation around the world, this (Bush) administration has been the worst in history.” There’s at least one other administration in the running for that title. It was around from 1977 to 1980.

January, 2006: “At least (Hamas) aren’t corrupt.” Thanks. Murdering, lying terrorists they may be. But at least they’re not corrupt.

September, 2005: “Well I would say that in the year 2000, the country failed abysmally in the presidential election process … There’s no doubt in my mind that Al Gore was elected president.” See how that whole presidential democracy thing bugs him?

September, 2004: “… Here’s what I will be doing: Everything I can to put John Kerry in the White House with John Edwards right there beside him.” Working to put John Edwards in the White House. Jimmy Carter: A judge of men. Think of the love children we could have seen grow up there.
© Posted By Diogenes Sarcastica™ on 7/31/2013 08:31:00 AM
Labels: Leadership, O's House