I wonder if Al Gore will attend the wedding?

Charles Manson, the most notorious killer of the twentieth century, has found himself a lovely young lady who is super-excited to marry him. Rolling Stone has an in-depth feature on Manson coming out in their next issue and Wednesday they dropped the surprising news of Charlie’s engagement. Here he is sporting a new Miley Cyrus haircut with his bride-to-be: 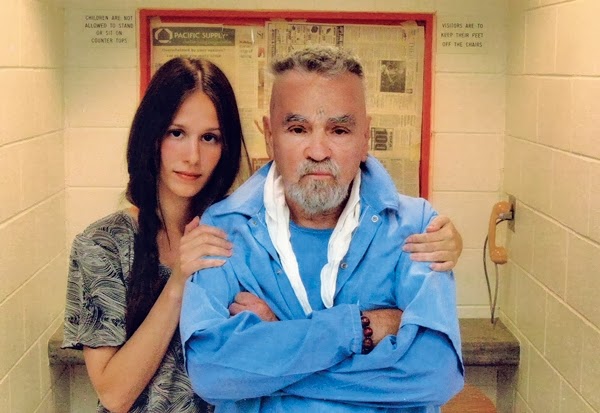 The young woman is simply named Star, a name Manson gave her. Now 25, she started following Manson’s writing at 19 and moved to be near his prison in 2007. She was initially drawn to his pro-environmental writing, and has recently carved an X into her forehead in apparent solidarity with Charlie’s own swastika marking.

“I’ll tell you straight up, Charlie and I are going to get married,” she tells Rolling Stone. “When that will be, we don’t know. But I take it very seriously. Charlie is my husband. Charlie told me to tell you this,” she continues. “We haven’t told anybody about that.”

Charlie himself seems to be having cold feet. “Oh that,” he says he says of the pressure for marriage like a typical guy. “That’s a bunch of garbage. You know that, man. That’s trash. We’re just playing that for public consumption.”

What public consumption he means isn’t exactly clear, since the couple probably won’t be registering anywhere. At any rate, married or no, the probably won’t get any conjugal visits because as Star explains, “California lifers no longer get them.”
© Posted By Diogenes Sarcastica™ on 11/20/2013 05:05:00 PM