But it was in the name of science you understand..... 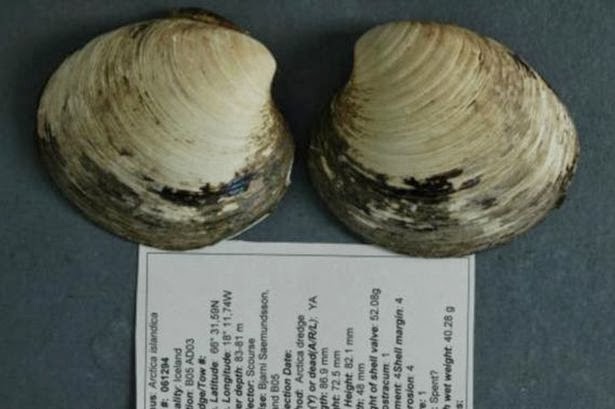 
A clam has been hailed as the world’s oldest creature at 507 years old after researchers sent to verify its age KILLED it.

Christened Ming, it was found by climate change experts from Bangor University in north Wales on a trip dredging the seabeds of Iceland in 2006. After the discovery, scientists counted the rings on the inside shell to work out Ming had been a wise old 405.

Unfortunately researchers who calculated Ming’s age killed it instantly by opening its shell.

But now, seven years on, new calculations show the original age was wrong, and the clam was actually 102 years OLDER. It means Ming, named after the Chinese dynasty, was born in 1499.

Ocean scientist Paul Butler from Bangor University said: “We got it wrong the first time and maybe we were a bit hasty publishing our findings back then.

“But we are absolutely certain that we’ve got the right age now.

“The nice thing about these shells is that they have distinct annual growth lines, so we can accurately date the shell material. That’s just the same as what archaeologists do when they use tree rings in dead wood to work out the dates of old buildings.”

The discovery of Ming was so eye-opening that Help The Aged offered a £40,000 grant to the team to investigate how the molusc, born when Queen Elizabeth I was on the throne, has survived over the centuries. Before Ming came along, the unofficial record for the world’s oldest animal was held by a 374-year-old Icelandic clam in a German museum.