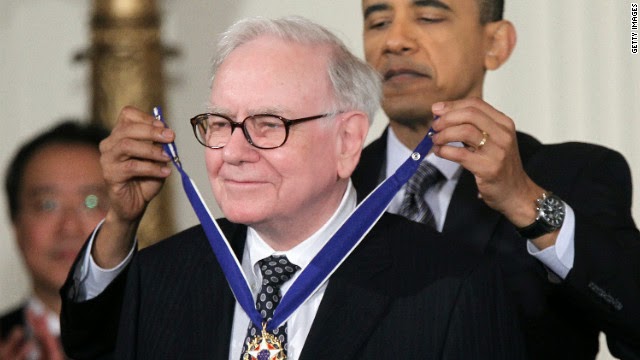 Billionaire Warren Buffet, often called the Oracle of Omaha for his business acumen, has, once again, blown his cover as a common man of the Midwest.

Early on, Buffet jumped on President Obama's bandwagon to criticize those companies that relocate their headquarters outside the United States in order to reduce their tax liability.  Obama, with Buffet right behind him, has castigated corporations for moving their headquarters out of the Unites States and characterized them as unpatriotic, although what they are doing is completely legal.

Bear in mind that the corporate tax rate in the U.S. is 35% and advances to over 40% when state and local taxes are included.  The 35% U.S. rate, in comparison, is the highest corporate tax rate in the world.  Also note that those companies that move their company headquarters out of the United States are not avoiding any corporate taxes for their operations in the U.S..  They are simply avoiding taxes on those profits earned outside the U.S., which they are currently obligated to pay to the U.S. Treasury.


"In May, billionaire Warren Buffett blasted the very corporate “tax inversion” schemes his firm Berkshire Hathaway is about to finance as part of Burger King relocating its headquarters to Canada to lower its tax burden."

Buffet is Chairman of the Board of investment goliath Berkshire Hathaway and its largest investor.  It's reported that Berkshire is about to spend $3 billion dollars to buy a significant portion of Burger King, which is moving to Canada, to enjoy their lower corporate tax rate.

Someone please tell me why Warren Buffet is not a hypocrite for supporting and profiting from a corporation seeking to reduce its tax liability in the U. S. by moving it headquarters outside the U.S., all the while joining President Obama in condemning such actions?
© Posted By Diogenes Sarcastica™ on 8/27/2014 03:11:00 PM
Labels: Hypocrisy, Rob Janicki