The Pyramid of Nicholas Cage

We'll Be Stuck With Him Forever

It's not unusual to see well known people walk down any New Orleans street.  Many have homes here, Harry Shearer, Brad Pitt, Tom Jones, Sandra Bullock, Harry Connick, Jr .....because there is no city like New Orleans. Here they are treated like neighbors and not so much like a star. They live here for the laid back, easy going atmosphere far from the cosmopolitan crowd, the incredible food and where you can always find a reason for a party. One such famous resident recently caused a bit of a stir. But it's seems in line with his reputation of being..... a bit kooky.

Last time I checked, Nicholas Cage was not dead. Neither was he a Pharaoh (at least not in this dimension). Yet, he has his built his own kingly pyramid tomb in the thickly populated historic St. Louis Cemetery of New Orleans.


"Saint Louis Cemetery is a two-hundred-year-old cemetery located in New Orleans, that holds the remains of some of the city’s most famous personalities including the voodoo Queen Marie Laveau.  Despite being already congested, in 2010, Hollywood star Nicholas Cage managed to acquire a rather large plot in his name, where he built a stark, nine-foot-tall stone pyramid. The pyramid bears no inscription but the Latin motto "Omnia Ab Uno", which translates as "Everything From One". 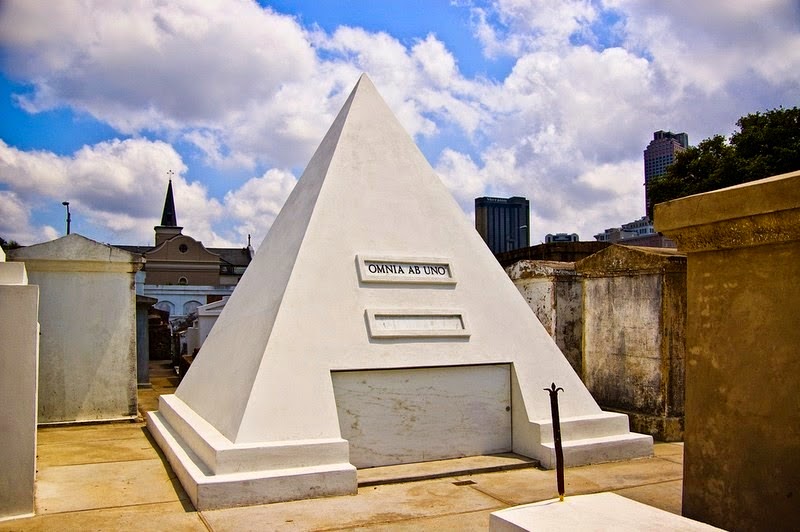 "While there is no doubt, the pyramid was chosen by the actor to be his final resting place, Nicolas Cage himself has never made a public declaration as to why he bought the pyramid-shaped tomb. Some speculate that the actor prescribes to the beliefs of the illuminati, others attempt to make a weak connection to the picture of a pyramid that appeared on the poster of the movie “National Treasure” in which Nicholas Cage acted. There is even a wild theory that the pyramid is full of gold and cash that the actor is trying to shelter from his well known problems with the IRS.

Public opinion is divided. Purists hate Cage's pyramid, tour guides ridicule him and New Orleans locals are furious that he was even able to obtain a plot the size of four ordinary burial plots in the cramped graveyard.

Female fans, on the other hand, love it – leaving lipstick prints on Cage’s tomb."