ST. LOUIS • Police have made an arrest in connection with a two-week string of church arsons the Post-Dispatch has learned. The suspect is a black man in his 30s, according to a police source. David Lopez Jackson, 35, was charged Friday afternoon with two in a string of seven church fires this month but authorities say they don't yet know the motive.

The charges, two counts of second-degree arson, list his address as in the 200 block of Presley Road in the Glasgow Village area of unincorporated St. Louis County. He was held in lieu of $75,000 bail, according to court documents.

Forensic evidence linked him to the fire at Ebenezer Lutheran Church on Oct. 18, and video of his car near New Life Missionary Baptist Church links him to the fire there on Oct. 17, Police Chief Sam Dotson said.  Investigators are expected to seek criminal charges against him today. Jackson's criminal record dates to 1998, when he was arrested and charged with unlawful use of a weapon. He has also been charged with domestic assault, burglary, drug-related crimes, resisting arrest and assaulting a police officer.

The string of fires, many of which did minimal damage, drew attention of local and federal investigators. The locations drew speculation of whether it was a hate crime. 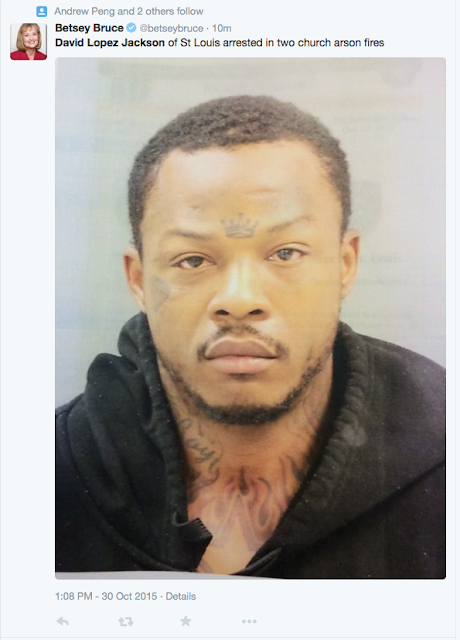