The Tussle in Tuscaloosa 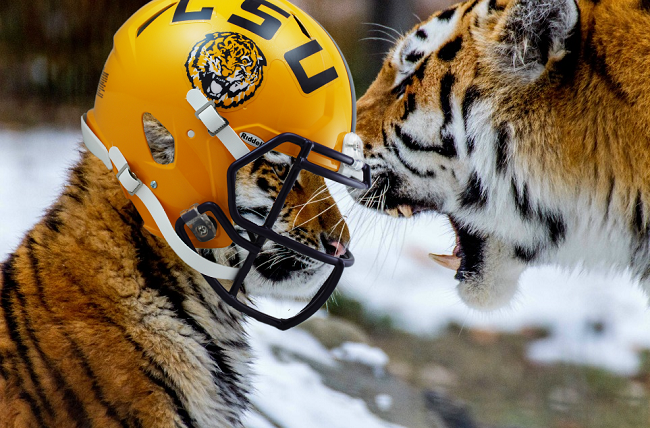 I've been told that in the upper left hand corner of the chalkboard in the football defensive squad room at Louisiana State University are written the numbers '2011', circled in red. Every defensive player for LSU in the last few years knows the meaning, and the reason they are there.

On November 5th, 2011, a crowd of 101,800+ squeezed into Bryant-Denny Stadium in Tuscaloosa Alabama to create a sea of red and witness the visiting #1 ranked LSU Tigers battle their #2 ranked Crimson Tide in what the sporting press of the time were calling 'The Game of the Century'.  It lived up to it's name. It was a 4 quarter epic defensive struggle with neither team able to cross the goal line.  LSU won 9-6 with a field goal in overtime.

Two months later, on January 9th, the undefeated #1 Tigers and the #2 Crimson Tide met once again for rematch in New Orleans, this time for the BCS National Championship.

It was the showdown of the top 2 defenses in college football. This time the LSU defense faltered, and gave up a touchdown, the only one of the game. Alabama kicked their way to a 21-0 victory and captured the 2011 BCS Title, thus denying LSU it's 3rd National Championship in 9 years, and giving Alabama their 2nd Championship Title in 3 years. The mighty Crimson Tide would go on to repeat as National Champions of college football the following year.

Thus are the things of historic rivalries. And this is a rivalry that includes the legendary coaching days of Bear Byrant and Charlie McClendon. And as most years, the last meeting was worthy of such rivalries. With just 50 seconds left on the clock, the #14 Tigers were on the verge of a 13-10 upset of #4 Alabama. A mistake gave The Tide field position and a field goal put the game into overtime, with Alabama scoring an unanswered touchdown for a 20-13 win. That win helped catapulted Alabama on to the SEC Championship and one of four National Championship playoff berths.

Saturday night in Tuscaloosa  will be the 80th regular season meeting of the teams, and once again an important stage is set. Beside bragging rites, this game holds the key to a SEC West Championship and a step towards a National Champion playoff berth.

Few rivalries in college football can match the anticipation and  excitement generated on both sides, or hold the importance of the yearly meeting of the Tigers of LSU and the Alabama Crimson Tide.  7 of the last 9 meetings between the teams have been decided by 9 points or less, and since 2003, Alabama and LSU combined have made 6 National Championship Game appearances. (3-0 & 2-1 respectively)

The Crimson Tide have owned the Tigers since that January night in New Orleans. But the Football Gods have shined favorably this year on a young Tiger team who have played well ahead of their age and years of experience, and many believe this could be the year '2011' finally gets erased from the chalkboard.

And as is becoming our tradition, in the spirit of sportsmanship and rivalry, both I and my Blog Sister Curmudgeon of 'The Political Clown Parade', the most die hard Crimson Tide fan I've ever known who proudly bleeds the Crimson and White of Alabama,  shall make a charitable contribution to The Wounded Warrior Project in the name of the winner, to honor the wounded men an women who have made their sacrificed to help insure the freedom we all enjoy.

So, as in years past it's now time to throw out meaningless poll rankings, power indexes and efficiency ratings and to ignore the 'expert sports monkey's' opining.  Whoever brings their 'A' game and makes the least mistakes will walk away the victor Saturday night.


So buckle in boys and girls.....
Alabama and LSU gonna play some football!! 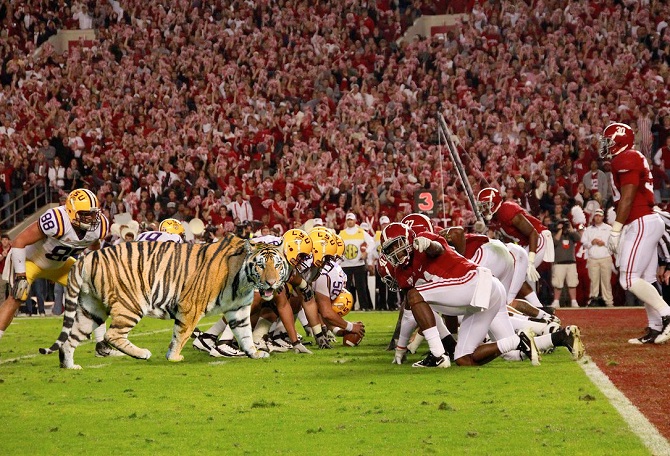