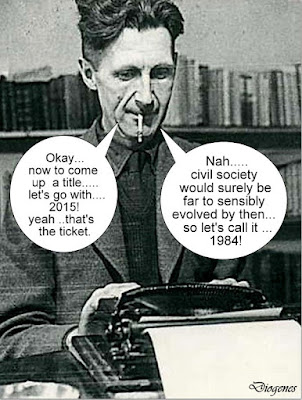 Independent Sentinel - We have our first attack against “climate change” deniers by one of the 16 AGs who have formed a group specifically to go after the free speech of anyone who disagrees with their extreme views on climate change.

If you recall former Vice President and global warming guru Al Gore and 16 Attorneys General, calling themselves the “AGs United for Clean Power”, announced at a press conference last week that they will criminalize climate change denial by corporations.

This is meant to squelch dissent and free speech.

The first volley was lobbed by the US Attorney General for the Virgin Islands, one of the sixteen, and he is going after a powerful think tank, Competitive Enterprise Institute (CEI). Are they our new thought police?

The CEI website describes their organization as a non-profit public policy organization dedicated to advancing the principles of limited government, free enterprise, and individual liberty. Our mission is to promote both freedom and fairness by making good policy good politics. We make the uncompromising case for economic freedom because we believe it is essential for entrepreneurship, innovation, and prosperity to flourish.

This is particularly shocking because they are going after a think tank, not an oil or gas company. Think about that!


The Competitive Enterprise Institute (CEI) today denounced a subpoena from Attorney General Claude E. Walker of the U.S. Virgin Islands that attempts to unearth a decade of the organization’s materials and work on climate change policy. This is the latest effort in an intimidation campaign to criminalize speech and research on the climate debate, led by New York Attorney General Eric Schneiderman and former Vice President Al Gore.

The subpoena requests a decade’s worth of communications, emails, statements, drafts, and other documents regarding CEI’s work on climate change and energy policy, including private donor information. It demands that CEI produce these materials from 20 years ago, from 1997-2007, by April 30, 2016.

New York Attorney General Eric Schneiderman told the gaggle of press that “The bottom line is simple: Climate change is real” and if companies are committing fraud by “lying” about the dangers of climate change, they will “pursue them to the fullest extent of the law.”

Ladies and Gentlemen, please be patient.
Your Thought Criminal IDs will be  issued to you shortly.........
© Posted By Diogenes Sarcastica™ on 4/09/2016 09:10:00 PM
Labels: Crazy Train, Defy the Narrative
Newer Post Older Post Home