Another Hallowed American Institution Falls Into the Hands of Leftist

One the few lasting  major accomplishment Barack Obama will be able to point to, besides running up a massive national debt, is his masterful job of appointing and getting confirmed major tenured government positions with unqualified, affirmative action candidates, using what has come to be called "Identity Politics". All that really matters is race and gender. The latest target, the vaunted position of  Librarian  of Congress. 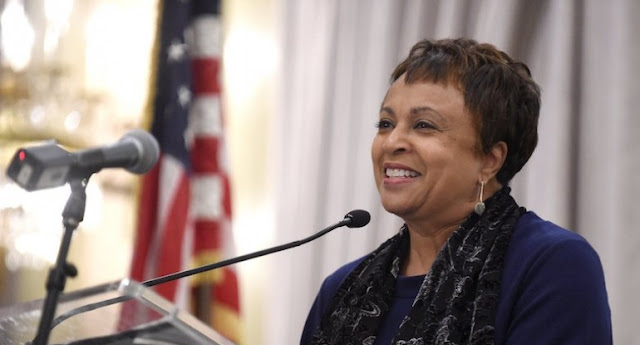 PJ Media - There is now a Republican-led effort for the Senate to confirm President Obama’s nomination of Carla Hayden to be the librarian of Congress. Her confirmation hearing proceeded without any serious review of her record, her views, or her qualifications.

The American people should be asking why any senator would be anxious to confirm a nominee who is not only unqualified, but whom The Nation magazine celebrated as a “radical librarian” who champions unrestricted access to pornography in public libraries.

Other members of Congress should be asking why there is such a hurry to put a non-scholarly political activist in charge of their research arm -- the Congressional Research Service, which is within the Library of Congress. The post of librarian of Congress has long been filled not by librarians, but by first-rank scholars and historians of national reputation.

The librarian of Congress is, in effect, the nation’s scholar-in-chief. Retired incumbent James H. Billington, who left the position in 2015, authored five books, dozens of scholarly articles, and was the former director of the Smithsonian’s Woodrow Wilson International Center for Scholars. He also taught history at Harvard and Princeton. His predecessor Daniel Boorstin was a prolific scholar of the American experience -- his book The Americans won the Pulitzer Prize.

And what are Carla Hayden's qualifications for such a prestigious post? She headed the Enoch Pratt Free Library in Baltimore since 1993. She has edited, not written, only one book: a bibliography of culturally diverse materials, and is neither a scholar nor a historian.


The post of librarian of Congress is of vital importance to the nation's cultural and intellectual life. However, she seems to have been nominated, according to National Review, because of the Obama administration's “yoke of identity politics.” Obama didn’t emphasize her qualifications as a scholar or historian when he nominated her because of “her meager scholarly credentials,” according to the Weekly Standard. Instead, Obama emphasized her gender and race:

"Carla Hayden would be the first woman and the first African American to hold the position – both of which are long overdue."

This is just another step towards the Lefts Orwellian world of the  control of history and information. The Library itself is a prime target for the Left, which works to change our culture, impose politically correct restrictions, and erase any of our history they do not like.
© Posted By Diogenes Sarcastica™ on 7/13/2016 08:00:00 PM