The BEST REASON YET to Disband the Department of Education

When President Jimmy Carter created the DOE in the late 1970's America had one of the best early education systems in the world. Those days have passed  Taking over the system by the Federal Government as a sidebar to equality in education under the guise of civil rights, gave undue power of indoctrination. Courts began upholding a misinterpreted "Separation of Church and State" and ACLU lawyers stormed school house doors with orders to stop anything (like evil Christmas plays) even remotely Christian in nature.
Where are they now while children are being indoctrinated in Islam? 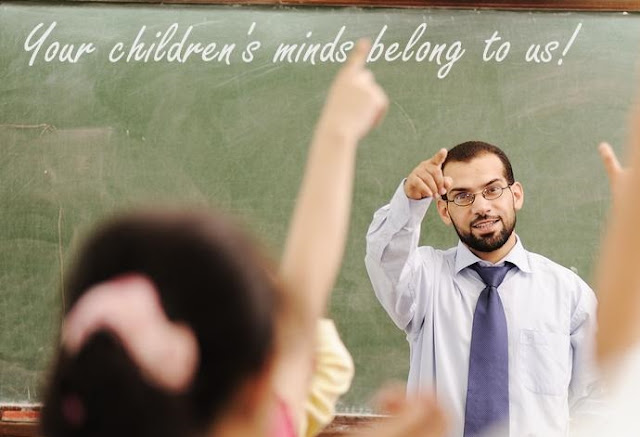 If the conditions of its “Letter of Demand” are not met within 60 days, CAN says it will bring a federal lawsuit against the DOE challenging the constitutionality of the federally funded program. CAN is also issuing a “Letter of Demand” to the Public Broadcasting Service demanding that it also remove all Islamic educational material from its PBS LearningMedia that violates the U.S. Constitution.

"The DOE Islamic education program is not only a certain violation of the U.S. Constitution but a brazen and underhanded attempt to indoctrinate children into the religion of Islam. It must be removed immediately."

Among the contentious material being presented through the DOE Islam program are worksheets, questions, activities and media that steep children into the world of Islamic worship. Children are asked, or told, to complete such assignments as:


“…explore and understand the basic beliefs of Islam as well as the Five Pillars that guide Muslims in their daily life; belief, fasting, almsgiving, and pilgrimage.”

“…focus on learning about the core duties of Muslims…”

“…read about what it means to proclaim faith or belief as a Muslim.”

“…watch the two streaming video segments about prayer preparation and the set of movements for prayer.”

In addition, students are expected to correctly understand and answer such questions as:


“Describe the process that Muslims go through to prepare to pray.” “What do the prayers sound like?”

“What are some of the things Muslims say during prayer?”

Activities include having students “create a poster about the Five Pillars of Islam to be displayed in the classroom and around the school.


“This Islamic educational program fails as an appropriate lesson plan for the public schools. It has little or nothing to do with understanding the history of Islam, its contributions to society or its impact on social norms.”


This is MUSLIM INDOCTRINATION, pure and simple!