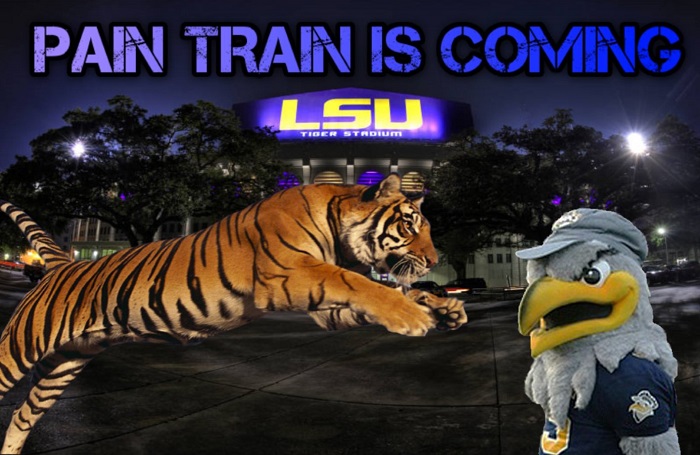 Saturday Night in Baton Rouge the Lights will shine brightly for the first time this season in Tiger Stadium as LSU welcomes the Chattanooga Mocks to Death Valley. (6:30pm CT - SEC Net.)  The Mocks are ranked #14 in the latest FCS coaches poll despite losing their opener to Jacksonville state.

After last weeks game against BYU, who the Tigers held scoreless and didn't let advance past the 50 yd. line, the Mocks may be in for a good ol' Cajun slap down. The Tigers are showing confidence and I suspect that if the game were to get out of hand, we may see the future of Tiger football, Miles Brennan at QB in the second half.  The Tiger Defense, starting five freshmen and without three of their stellar veterans played lights out last week, and the new Matt Canada Offense looked good....at least between the 10 yd. lines. There is still much room for improvement before the Tigers start conference play next week and begin this years tough march through the south.

This Week in the SEC:

My prediction of a clean sweep in SEC team openers went up in smoke thanks to a friggin' Texas A&M team who blew a 44-17 lead going into the 4th quarter. 44-17!!! How's that A&M DC job workin' out for ya John Chavis?

Florida vs Northern Colorado - Cancelled
Funny thing happened on the road to the SEC East Championship. The Squirrel and his Gators got run over by a big yellow bus driven by Jim Harbaugh.  Mercifully the Gators will be spared the wrath of the Northern Colorado Bears because of Irma, and it will be just another week the Gators offense won't get near a goal Line.


TCU vs Arkansas - 2:30pm CT - CBS
The Frogs and the Hogs go at it again. This could be a really good game. Their meeting last year was a shootout that went into overtime.  But The Hogs got them a dandy QB and said to have a stout Offensive line as they proved against Florida A&M last week. This years game is in Fayetteville, and a typical Big 12 defense shouldn't be to much trouble for the Hogs run game.


Abuburn vs Clemson - 6pm CT - ESPN
Okay, I'm not drinking the Auburn kool-aid just yet. Like my own Tigers, the question is what can they do against a good SEC defense. The Baylor transfer wiz-kid showed last week he can air it out, but he made major mistakes that you can only get away with playing cupcakes. Coming from the Big 12 where it's not unusual for two teams to rack up 80+ points in a game, and defense is just that thing that surrounds the parking lot, I want to see what Mr. QB can do against a top tier ACC and SEC defense before we declare them Alabama's main contender.

Despite the 1st half play, Clemson takes them down convincingly in the 2nd half...


Tennessee vs Indiana St. - 3pm CT - SEC Network
No ones looking in the Vols direction this year, but I have picked them as one of the major conference spoilers and possible backdoor contenders for the SEC East. We'll have to see what Butch Jones can bring about being on a hot seat this year. Teams tend to play up to it and I think the Vols may surprise some people.  This week shouldn't be a problem for them.


✔ UPSET PREDICTION: The Sooners get revenge
on the Bucknutts of Ohio in their own crib.
You don't get away with singing your alma mater
on an opponents field after a game like last year.