Bend Over And Smile America. 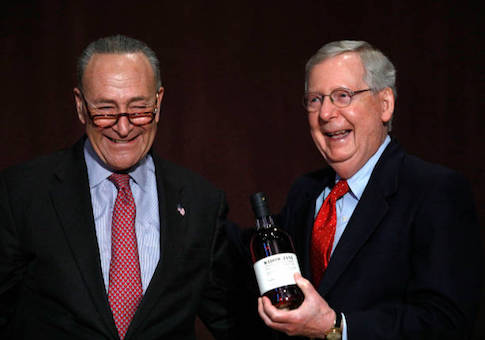 The Military and the Congressional Employees Are the Big Winners. American People Not So Much

Free Beacon- The House and Senate increased their own budgets in the $1.3 trillion omnibus spending package. The Senate increased its total salaries of officers and employees by $12.6 million in the 2,232-page bill   The legislation increases the Senate budget to $919.9 million, up $48.8 million from fiscal year 2017, according to the congressional summary of the bill. "The increase provides funding necessary for critical modernization and upgrades of the Senate financial management system and investments in IT security," the summary states.

Meanwhile, the House of Representatives increased its budget to $1.2 billion, which is $10.9 million above 2017 levels. Salaries of staffers in the Senate are also set for an increase. Division I of the legislation breaks down the total salaries of officers and employees, which are being raised from $182 million in 2017 to $194.8 million in the final bill, an increase of $12.58 million.