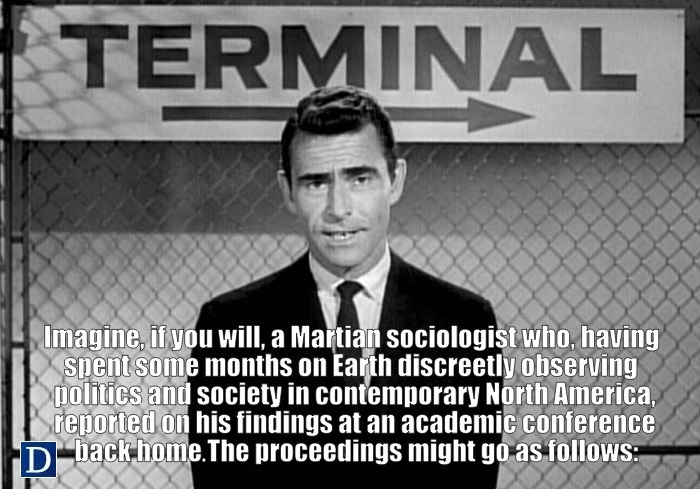 "The humans have a bifurcated social structure that divides them into two major groups. The first group, the majority of the population, appears to do most of the productive work in their economy. With respect to the second, much smaller group, a tiny fraction owns almost all of the wealth and occupies most positions of economic and political authority at the highest, directorial levels; the rest occupy bureaucratic positions in the lower operational levels of their State, or positions in the judiciary and above all, the apparatuses of public education and communication."

"A striking feature of daily life among the humans is that the second group subjects the first to a campaign of concerted, continuous, and incessant humiliation and psychological terror. Day and night, carefully-crafted propaganda blares out from every apparatus of public instruction, and all of their many and ubiquitous types of communications media, derogating the first group (in Earth jargon, "straight White males", or alternately, "the Right") and collectively impugning it for a vast and seemingly infinite litany of crimes and outrages (many of which accusations appear to be transparently fabricated and wholly imaginary). A standing feature of this propaganda is that it ridicules, insults, and blasphemes the religion of the Rightists and desecrates the memory of their ancestors, for example in ritual public vandalism and destruction of monuments the White males built to honour those ancestors. In the face of this hectoring and abuse, which every citizen regardless of age or social standing is allowed and encouraged to commit, the White males are exhorted to "check your privilege and be quiet".

"Perhaps most striking of all is that, notwithstanding a sentimental exaltation of marriage and family life at the level of popular culture, that the family is a central instrument of State policy, and that population growth has long been regarded as an especially urgent interest of the State, seemingly no effort is spared to undermine the White family, above all the authority of the father.  The latter is "patriarchy" and deemed an especially heinous form of barbarism to be eradicated."

"Whatever his marital status, his children are exhorted in the course of their education, and once again as highly commendable civic behavior, to serial sexual delinquency if female, and to homosexuality and, more recently, self-castration and public repudiation of his sex if male. Not only can any female elect to have her yet-unborn child murdered in the womb with impunity and without any consent from its father, much less hers, the State is required to subsidize the procedure."

"Last but not least, a campaign is underway to strip the Rightists of their right to own small arms for sport and personal defense- even though juridically this right is considered "Constitutional", viz. inviolate. To underscore the avowed intention of humiliating and emasculating the Rightist family men, the orchestrators of the campaign have opted to use minor children as the public face of the campaign."

"The second group are colloquially known as "Leftists". The Leftists claim to possess, by a type of special grace, a special gnosis that elevates them to a singularly rarefied form of moral and ethical consciousness, a holy state known as being "woke". The "woke" individual has a privileged ability to discern right from wrong and justice from injustice, and on the basis of this charisma "speaks truth to power" on behalf of "oppressed" peoples that the woke have determined to have suffered injustice, above all at the hands of the Rightists and White men. Since membership in the ranks of the woke is based in charisma, in a claim to special grace, there are no fixed criteria of entry into its ranks, although all White men who have not undergone the aforementioned expiatory castration are disqualified, as is any White woman or non-white man."

"The Leftists stand out for being exquisitely sensitive in the extreme to any insult to their exalted social dignity. Since only a woke person is competent to distinguish justice from injustice, a woke person is the sole judge of whether or not she has been offended. Jealously guarded monopoly on the administration of justice, the State indulges this practice, and more generally defers to the wishes of the Leftists in almost all matters- for the fiat privilege of being uniquely able to define injustice or "oppression" results in the (socially uncontested and incontestable) definition of oppression as any conceivable situation in which a Leftist does not get what she wants, when she wants it."

At this point one of the senior Martian sociologists quite reasonably interjects:

"Aha, so clearly these North American humans are a conquered people, a race of slaves- and these, what is it, Leftists obviously an aristocracy descended from the conquerors. Nothing we haven't seen a million times before in the history of that planet and others like it. Who did these North Americans lose the war to? Was it that traditional enemy of theirs, France I think it is called?"

"Actually, they've never been conquered; on the contrary, they are feared and despised across the planet as imperialists".

At this point, the senior scholar starts getting a bit flabbergasted.

"I've never in my life even heard of any species amongst which it could be seriously proposed that children- girls, no less!- could legitimately disarm grown males with a legal right to arms. No free male human would just stand there and take that; all known facts about history and society on Earth show they'd rather drop dead first. Don't tell me that these children aren't exceptionally high-born, sons and daughters of the patented nobility humiliating some unfree peasants for sport, or for having pretensions above their class".

"Some of the children indeed have rich parents-the State is forbidden by law to grant titles of nobility".

"You mean that the Leftists aren't even their nominal social superiors? What the hell is wrong with those people???"

* The above dialogue is excerpted from a much longer and detailed essay "The Will to Power and Contemporary Politics: A Martian Perspective" by our good friend Doug Smythe of Thermidor Magazine.


~Thank You Claudia & BB for the Linkage!~