No Time For Pulitzers. The Great Missing French Oak Caper

If Only the Media Were As Zealous About Finding Hillary's
33,00 Missing Emails

Americans and French citizens can now breathe a sigh of relief. Soon after major network investigation units swung into action, the riveting mystery of the missing French oak tree planted by President Donald Trump and French President Emmanuel Macron on the White House lawn has been solved. 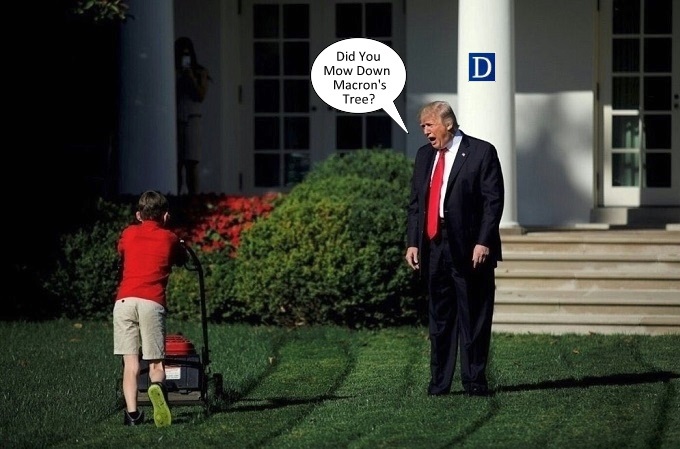 Something of a mystery had taken root at the White House when a media Lieutenant Columbo type noticed the oak tree sapling went missing. Rumors swirled after a picture posted by Reuters photographer Yuri Gripas appeared to show a bare spot on the South Lawn of the White House where the tree had previously stood. The media jumped into action and were hot on the case. 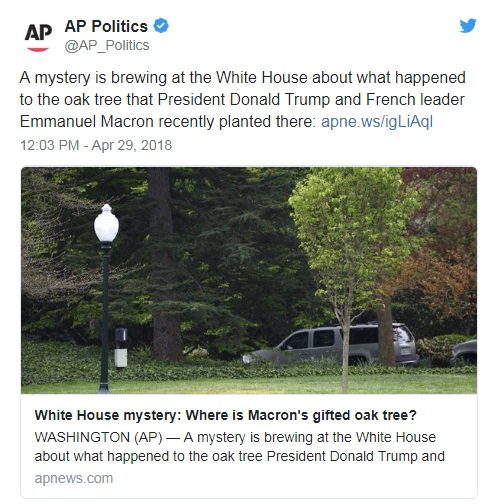 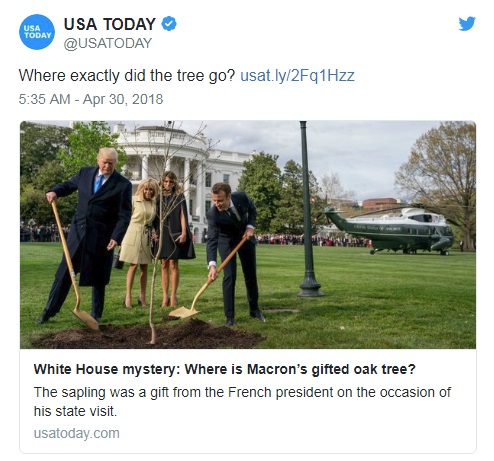 The sapling was a gift from the French president during last week's ballyhooed state visit. But less than a week later pictures by the media sleuth showed only an off-color patch of turf where the sapling had been last seen.

Not surprisingly, the White House did not immediately respond to the media inquires and requests for comment. (but laughing was said to be heard coming from the direction of the West Wing).

After all the brouhaha, it turns out the tree planting was only ceremonial, as the plant needed to be quarantined before it could be permanently planted in accordance with U.S. Customs and Border Protection guidelines. Late in the day an official from France's presidential office said the jig was up and finally told Reuters the tree, imported from France's Belleau Wood forest, needed to be quarantined in order to prevent the spread of any potential parasites or diseases and it would return in the near future.  Even a tree from France needs to be thoroughly vetted and quarantined before entering the US. So Why Not Immigrants??