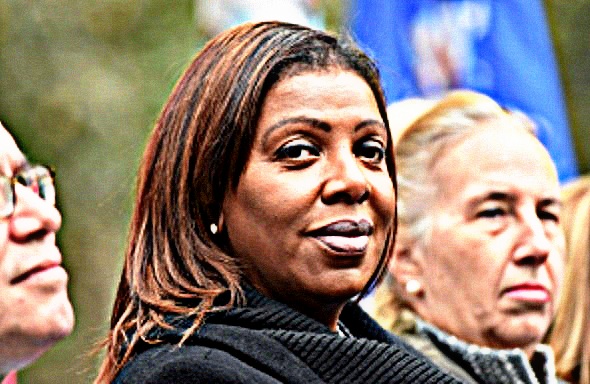 Previous New York Attorney Generals have worked to weaponize the office for the purpose of investigating any possible illegal activities concerning anything Trump. But the new AG-elect, Letitia James, vows to go one step further than her predecessors, going full on thug and threatening to get him any way she can, even to go as far as attempting to change NY laws to do so.

Once the toast of NY, awarded for his civic activities, support of civil rights, and charity to the people of NYC, there should be no doubt left in anyone's mind that now DJT is marked for an open and public take down, any way possible, his family name smeared and anyone associated with him suspect.

A perfect tool, James, being black is untouchable by criticism is signaling the possible use of tactics not even used against mobsters and Organized Crime.


NBC - New York Attorney Gen.-elect Letitia James says she plans to launch sweeping investigations into President Donald Trump, his family and "anyone" in his circle who may have violated the law.

James campaigned on passing a bill to change New York's double jeopardy laws. James told NBC News she wants to be able to pursue state charges against anyone the president were to pardon over federal charges or convictions and whose alleged crimes took place in the state. Under current New York law, she might not be able to do that.

"We will use every area of the law to investigate President Trump and his business transactions and that of his family as well," James, a Democrat, told NBC News in her first extensive interview since she was elected last month. She's also enlisting help from some prosecutorial heavy hitters, like former U.S. Attorney General Loretta Lynch, as a part of her transition to help her identify important hires for her office with an eye on bringing in experts for its Trump-related investigations.

Some of the probes she intends to pursue with regard to the president, his businesses and his family members include:
Harvard Law professor emeritus Alan Dershowitz told NBC News that the president has "considerably more vulnerability" when faced with New York state investigations because he can't hold out the offer of pardons or fire investigators, though he said James' scope would be limited to matters occurring before Trump became president. - MORE

Regardless what happens in the future as far as DJT's presidency, good or bad, this man, his family and people within sphere of influence will be smeared and harassed for the rest of their lives if the left and their fellow travelers in the media are allowed to continue to run amok in America.