There's a rumor Nancy Pelosi's blood pressure collar is directly wired into the 9-11 call center, and there is a shortage of aspirin in DC because of pain in the asses of Democrats these days. Why? Two Words: Ilhan Omar. 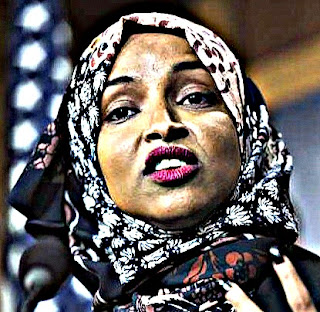 She's like a loose cannon, a bull in a China shop and stoned freshman at Berkeley free speech week all rolled into one. And now she's gone and stabbed the sacred cow of the the left, the Black Pearl himself, Barky Obama.

In an interview published at Politico, Omar ripped Obama, belittling his “pretty face” and saying his agenda of hope and change was an illusion. A pretty face who got away with murder.


She cited the “caging of kids” at the Mexican border and the “droning of countries around the world” on Obama’s watch — and argued that he wasn’t much different from President Trump.

"His policies are bad, but many of the people who came before him also had really bad policies. They just were more polished than he was.  We don’t want anybody to get away with murder because they are polished. We want to recognize the actual policies that are behind the pretty face and the smile. We can’t be only upset with Trump."

The comments about a man lionized by Democrats were only the latest in a series of incendiary statements that have put the national spotlight on Omar, a Somali Muslim. Omar — along with Rashida Tlaib of Michigan the first Muslim women in Congress — said she’s willing to keep speaking out and be a Republican punching bag if it helps advance her agenda, a prospect that likely makes many of her fellow Democrats cringe.

UPDATE: 7 PM via Twitchy:
"Rep. Ilhan Omar accused Politico’s Tim Alberta of distorting her words in an article that went live this morning and she posted the audio of the interview to prove it......."