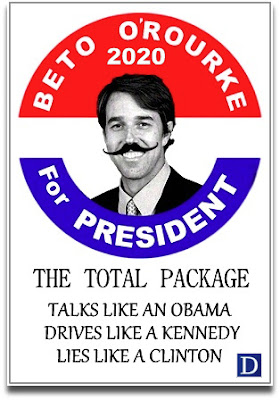 The Psychedelic Warrior has dropped out of the 2020 presidential race after a disappointing campaign that failed to build momentum. Twice Three times.

Señor Beto wanted to be the all-white Obama, but he just didn't have it. Obama's one and only talent was lying with a straight face, telling enormous whoppers smoothly enough to fool enough people enough of the time. Beto is just off-putting.

Beto spent like half his waking hours hopping on the countertops of coffee shops across Iowa, but to no avail. Saying "I am a nice safe white man. But not gay. Unless being gay would get me votes. I could be gay. Please vote for me...Please??" And then there was that whole I'm coming for your guns thing. Brilliant!


"Tonight, I am a dancing bear, to be jeered at by a fickle press corps who surrendered their hearts to me in Texas, only to decide I wasn't good enough to bring home to mom and dad, that I wasn't "‘long-term" material, that they always saw our relationship as "more of a side chick situation." I'm starting to think they only shacked up with me to get back at Ted. Just look at them, sitting there all smug, talking trash behind my back to all their friends. Assholes."