It's Amazing How Quick the Narrative Changed After Polling Numbers

The media reluctantly finally got around to kinda shorta condemning the fiery, but mostly peaceful riots. The arson and looting and murders in the streets were all fun and games, but now the sympathetic media is worried that the violence is “showing up in the polling. It’s showing up in the focus groups. It is the only thing right now that is sticking.”

There’s a lot to be said about what CNN, particularly Don Lemon, who has done more than his part to legitimize this social unrest, has said or hasn't said.  It’s also worth pointing out how rioting only became objectionable once it threatened to hurt Democrats and not, say, those small business owners or anyone living in the affected cities. Riding the SJW wave to the WH has backfired, and Black Lives Matter has mutated into an electoral liability for the Democrat brand.

You may not recall, but Democratic pollster David Shor predicted that this would happen back in late May, and was promptly fired from his job for the trouble. His heresy was tweeting that race riots had likely tipped the 1968 general election in Nixon’s favor, with the obvious implication that the same thing could happen in 2020.

We can be sure now that it is indeed happening, and not a moment too soon.

Because the tweet coincided with the first mass protests over the killing of George Floyd, it generated some pushback. Nevermind that the research itself was conducted by a black sociologist at Princeton, Omar Wasow. 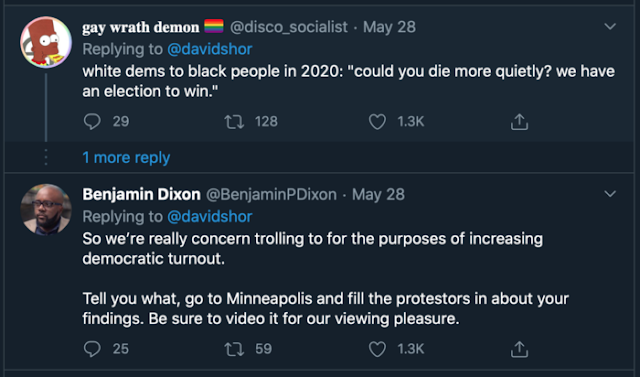 Less than a week after he tweeted the findings of Wasow, who is black, the senior leadership of Civis Analytics, which is predominantly white, fired Shor.

The media has now begun dancing madly backwards and have turned to promoting deranged insane rants against DJT, accusing him of promoting violence to sway the undecided vote.

So Let's Review:
Leftist are running through the streets of Democrat controlled cities, burning, looting, killing, attacking Police and innocent citizens and it's DJT's fault. Got That?