James Earl is Still Meddling After all These Years

Jimmy Carter Urges Barack Obama to Divide Up Israel at the United Nations Before Jan. 20

In a stunning editorial for the New York Times, former President Jimmy Carter has publicly called for Barack Obama to seek to divide the land of Israel at the United Nations before Inauguration Day.

While president, Carter negotiated peace between Israel and Egypt, and ever since, he has been a very strong advocate for a Palestinian state. Carter is completely convinced that a “two-state solution” will bring lasting peace to the Middle East, but now that Donald Trump has been elected, Carter knows that his dream of seeing a Palestinian state while he is still alive is rapidly slipping away. In a desperate attempt to salvage the situation, Carter is urging Barack Obama to take bold action while he still has the power to do so. 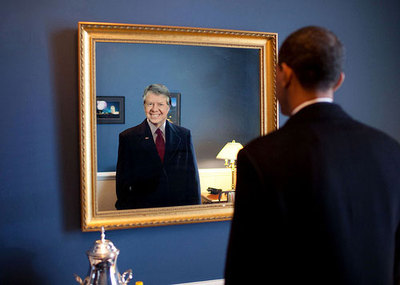 In his New York Times editorial, one of the steps Carter says Obama should take is to give formal U.S. diplomatic recognition to a Palestinian state.

"I am convinced that the United States can still shape the future of the Israeli-Palestinian conflict before a change in presidents, but time is very short. The simple but vital step this administration must take before its term expires on Jan. 20 is to grant American diplomatic recognition to the state of Palestine, as 137 countries have already done, and help it achieve full United Nations membership....."

Of course such a move would largely just be window dressing. The new Trump administration could very quickly revoke diplomatic recognition, and so if Barack Obama really wanted to "leave a legacy" in the Middle East he would have to do something that Donald Trump would not be able to undo.

Later on in his editorial, Carter suggested just such a thing. He urged Obama to support a U.N. Security Council resolution that would set forth firm parameters for resolving the conflict between the Israelis and the Palestinians.

"The Security Council should pass a resolution laying out the parameters for resolving the conflict. It should reaffirm the illegality of all Israeli settlements beyond the 1967 borders, while leaving open the possibility that the parties could negotiate modifications. Security guarantees for both Israel and Palestine are imperative, and the resolution must acknowledge the right of both the states of Israel and Palestine to live in peace and security. Further measures should include the demilitarization of the Palestinian state, and a possible peacekeeping force under the auspices of the United Nations......"

Over in Israel, the government has been ignoring Carter's anti-Israel rants for years, and they have also responded to this latest editorial by Carter with silence. Carter's criticism of Israel over the years has become increasingly scathing and one-sided.  - Read More

Yes Mr. Carter, "Blessed Are The Peace Makers". But the Lord was not referring to making deals with the Devil.....

Jimmy Carter Gives Hillary a Kick in the Cankles 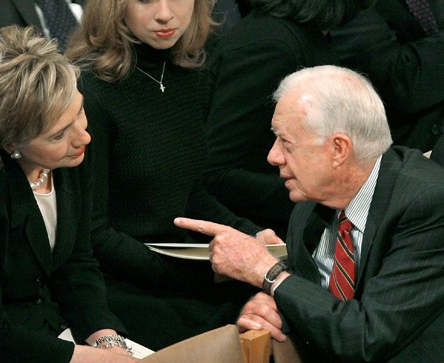 Jimmy Carter, America's favorite 2nd worst President, known for unpresidential like criticism of his successors is still out there writing books, giving droning speeches and on an unending mission to rehabilitate his image, is almost as reliable as Joe Biden when it comes to buffoonish comments.  Among others, calling Barack Obama a "Black Boy" at the 2008 Democrat Convention. But like a clock that's right twice a day, he sometime blindly stumbles headlong into the truth.


“Hillary Clinton took very little action as secretary of State to bring about peace. It was only John Kerry’s coming into office that reinitiated all these very important and crucial issues".

Spot on Jimmy! (be careful, there's a war on women going on ya know).
But then after kicking Hillary, he veers off into Jimmy Carter Land again and starts praising John Kerry and Obama's foreign policy".


"John Kerry has been successful as Secretary of State because President Obama has been deeply involved in the foreign policy issues of his second term. Since he took over in early 2013 as America’s top diplomat, Kerry has made enormous strides in negotiating with the Israelis and Palestinians, and putting an interim nuclear deal with Iran into motion."

It could be age, but Jimmy doesn't seem to recall the embarrassing Syrian debacle, Putin thumbing his nose at Dear Leader and Kerry just last week whining after making a mess that "mid-east peace had gone Poof. If a peace process can go “poof,” it can’t have been much of a peace process to start with.

I'm sure Jimmy will be good for a noteworthy comment or two leading up to the presidential primaries, especial if the 2016 Democrat nomination comes down to the party's two paragons of Foreign policy, Hillary Clinton and Joe Biden. Oh, what a debate that will be.
© Posted By Diogenes Sarcastica™ on 4/11/2014 10:30:00 AM No comments: