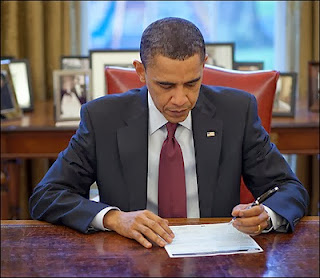 Dear Diary:
Bwaaaaha!ha! I won! I won! I had called Pootin on my iPresidentophone to gloat. It was late at night in Moscow but that only made it more delicious. He answered immediately: "Obamavitch! I know it's you because I have Al Green as your personal ring tone. What is it, Obamavitch?"

I heard a female voice in the background saying: " Vladimir, Vladimir, wherefore art thou, Vladimir?" It was clearly Pootin's Shakespearean actress/mistress with whom he was having a late-night tryst. I said: "Vlad, I got I wanted from the GOP and I'm now going to push for immigration reforms that should bring in another 30 million Democrat voters. "Well done, Obamavitch," he said, " I have a proposal: Here in Russia we have constant problems with Chechnya, a neighboring Sunni muslim country with population of only 1.2 million. How about giving them all political asylum? That would elevate you to superhero among muslims and guarantee you another million Democrats. In return I will continue to instruct you in the devious ways of politics."

"Sounds good, Vlad," I said. "I will seek approval from Comrade Jarrett." But enough about me.

by The Laughing Conservative

From the notebook of S.H. Rink, MD.

9/5/13 - Patient still unstable after panic attack on Air Force One. We landed at St Petersburg this morning and I have been asked to join him and Susan Rice in The Beast which was flown here because Patient did not want to travel in the same Mercedes Benz limos as the other G20 attendees to the conference at the Constantine Palace. Patient was still showing signs of Vladiphobia as we began the journey."I don't trust that Putin" he said as he peered anxiously out of the window. He spoke to the Secret service driver. "When we get there, how will we know it's the correct destination?" "Don't worry Sir," said the agent "I have driven the route several times to scout for potential security problems." Patient took on a panicked appearance. "Security problems? Oh, God... I knew I should never have entered Pootin's lair."

Patient assumed a fetal position on the back seat and began sucking his thumb. Within only minutes we were outside the Constantine Palace. Patient whimpered: " Doctor, how do I know this isn't the KGB headquarters and they are waiting inside to grab me?" asked Patient. The Secret Service agent, obviously used to Patient's outbursts, said calmly: "Sir, the Lubyanka is in Moscow. The only person waiting inside here is President Putin waiting to greet you."

" Oh God, Dr Rink, give me a shot of your magic juice," patient said to me, and against my better judgment I gave him a small injection of Ativan. "What is your first name, Dr Rink? Patient asked. "Stephen," I replied. "Stephen, please come inside with me, I need your support." We proceeded inside where, waiting for my patient, was his nemesis, Vlad Putin. The Ativan had kicked in now and patient reacted with only a slight wince as Putin's muscled hand clamped around his and squeezed... I could hear Patient's knuckles crack. Patient's Secret Service agents closed in at his sides and I took up the rear. So far so good. ---Dictated by S.H. Rink, MD.


9/6/13 - Patient went to bed very late last night and was up early this morning. He was angry at the world for not buying his Syria attack plan. Vlad Putin asked for a brief meeting this morning. Patient was suspicious of Putin but agreed to a meeting after I had administered a modest dose of Ativan to patient to diminish his Vladiphobia. I was not allowed to attend the meeting but patient emerged trembling and looking scared. "Get me to Air Force One, ASAP," he told his Secret Service detail. "Dr. Rink please stay with me. Please!"

When we were safely installed in the rear seat of The Beast, patient lay down, put a thumb in his mouth and pulled a small, pink blanket out of a door pocket and began to rub the satin edge against his cheek. "Boo-Boo make things better" he said. "Boo-boo is a good blankie." I nodded my agreement, hoping to keep the moron together long enough to get him back on board AF1 and his private office where I could counsel him and get him to relax for the long flight to DC. I was very concerned about what had happened during his one-on-one meeting with Putin, so I decided to hypnotize him. In my medical kit I have a device with a row of LEDs that light-up from side to side and I ask patients to follow the movement with their eyes. A state of hypnosis is usually quickly induced.

"Imagine you are again entering that private room with Putin," I tell him. " Tell me what transpires." Patient begins to tremble again and suddenly gasps: "Wummff" and grabs his stomach. "Putin's has suddenly pivoted and punched me in the solar plexus. He's saying: " Ovitch, keep the hell out of Syria, you pathetic pantiewaist. I fled before he could punch me again."

I tell patient to sleep and to wake in a couple hours when I snap my fingers. --Dictated by Dr S.H. Rink


9/7/13 - Patient remained in a deeply hypnotic trance for several hours. As dawn's early light shone through the windows of Air Force One I snapped my fingers near patient's ear and he sat up sleepily. " It's dawn" I said, "so I guess we'll be landing in DC in a couple hours. I will leave you now so you can catch up on events and have breakfast in peace." I made my way to the general cabin and gratefully accepted an offer of coffee.

I turned on my miniature digital recorder and dictated the general observations that follow: I have previously noted patient's Narcissistic Personality Disorder which today manifests itself as an obsession with Syria, where Patient is childishly focused on immediate gratification and seems completely incapable of thinking in terms of logical steps and consequences. Obamacare-- in which I have a vested interest, as a psychiatrist-- is another obvious example. When I am back in DC I will have to consult with Valerie Jarrett and Joe Biden about how they wish to proceed.

Personally, I would put the moron out to pasture. But that's just me. [BJS]

by The Laughing Conservative 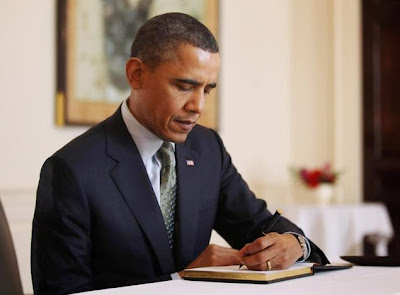 Dear Diary: I am running like a Pamplona bullrunner, dodging the horns of the Syrian dilemma. I have been in constant contact with David Cameron in London who says we can't stand aside while Assad unleashes a holocaust against his own people. "Why?" I asked, "why should we get involved?"

"It's a matter of honor", The Brit declared. " As powerful nations we must enforce a ban on nerve gas."

I replied: " Dude, did you seriously just say that? What's in it for us?"

"The satisfaction of doing the right thing."

But what if Val Jarrett disapproves? I think I will have to leave the decision to John Kerry so he takes the heat if there's screw-up. These are the dilemmas of a decisive, cutting-edge modern leader. But enough about me.
© Posted By Diogenes Sarcastica™ on 8/27/2013 11:53:00 AM 2 comments: