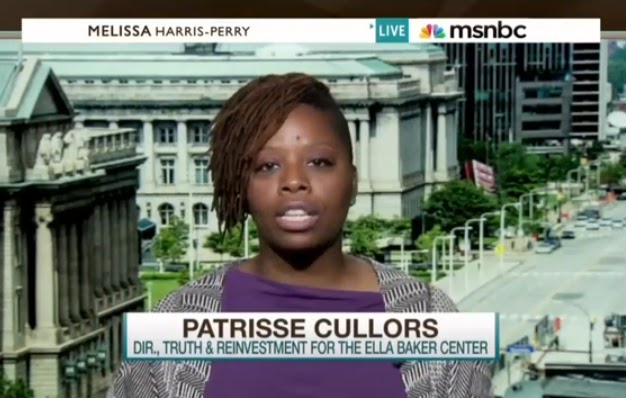 Black Lives Matter co-founder Patrisse Cullors has announced that "any opportunity we have to shut down a Republican convention, we will."

NB - Appearing on today's Melissa Harris-Perry show on MSNBC, Cullors also blithely spoke of "the murder of Mike Brown" in Ferguson, MO. Neither of the co-guest hosts sitting in for Harris-Perry, Richard Liu and Janet Mock, challenged Cullors' characterization.  This despite the fact that even Eric Holder's Justice Department found no wrongdoing on the part of the police officer who shot Brown.

JANET MOCK: What action do you want to see the candidates take for what the movement is calling for?

PATRISSE CULLORS: I think first off we want candidates to actually call movement leaders sit and have meetings with us, have a conversation with us about what's happened this last year since the murder of Mike Brown.

. . .  And trust and believe that any opportunity we have to shut down a Republican convention, we will. We will make sure that our voices are made loud and clear. And we also want to be clear that the Democratic party isn't off the hook.