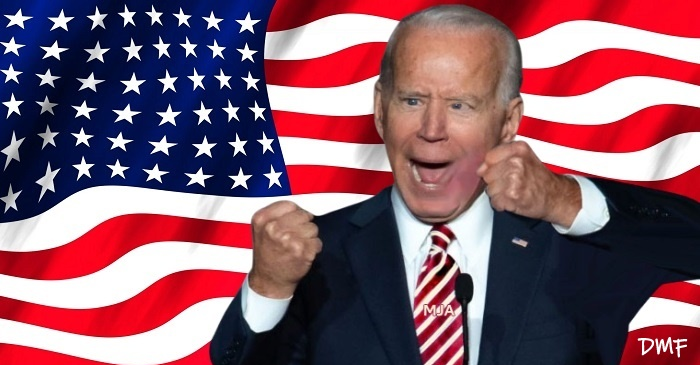 In case you hadn't heard, Granny Wine Box has invited 46* to the capital to give his very first address to Congress next Wednesday, which will roughly coincide with the 100th day of his Identity Politics-Social Justice handler's control of the our government.  It's a limited seating affair and not to be a State of the Union, because if it was he'd have to admit their responsibility of deepening the racial division of the country and the ongoing damage they are doing because of lack of Law and Order.  And it's not going to be the same dignified hoopla it usually is because no one really wants to hear 46* stumble through another lecture on Face Masks or the cool kids newest phrase: Systematic Racism.
Rank-and-file Republicans appear to have little interest in attending the speech, even if they could. The House is out of session that day, which means members would have to make a special trip back to D.C.  Most would rather be in there districts and spend some time with their families and probably wouldn't go in the first place anyway.  Like Sen. Tom Cotton (R-Ark.) who said "AH....No!" Sen. Joni Ernst (R-Iowa) won't be there. (plans on castrating a few live hogs with those new ball cutters she got for Christmas maybe?)  Sen. Josh Hawley (R-Mo.) surprisingly is a no.  Rep. Rodney Davis (R-Ill.)"we already have plans." Rep. Cathy McMorris Rogers (R-Wash.): "Nope...."(probably has to wash her hair or something) to name just a few who have better things to do.
Poor Joe. He’s waited a lifetime to do this. And it turns out to be a Covid fear, black face mask, limited affair.  He sat in the crowd for dozens of these speeches as a senator in his 36 years in Congress.  He sat on the dais for another nine years behind Barky Obama as he droned on incessantly,  while entertaining himself with coloring books from the House Gift Shop.  But this time, he gets to be the center stage act of the democrat circus.
And for the first time ever, two women will be sitting behind the president during an address to Congress. VP Kampala Harris, who accused Joe during debates of being a racist, and who as California AG, using Joe's famous 90's black predator crime bill he's been known to bragged about, together are as responsible for putting more black males in prison than any two people involved such things.  And in the other chair of course will be the Botox-embalmed Gelato Queen, Nan Pelosi, who sadly won't reprise her display of paper shredding super strength for her slobbering fan girls this time. And you can bet the media will play it up as the most historic speech in DC since George Washington's farewell.
And yes, yes I know lots of dems acting like spoiled children skipped DJT's inauguration after he won the Electoral College because some Russians bought ads on Facebook.  Joe Biden, on the other hand, won the popular vote by approximately seventy hundred million votes and won the Electoral College by the same margin Russia won it in 2016. He is a legitimate president, and not an authoritarian un-American white supremacist.
Anyway, mark your calendars for next Wednesday night! Pelosi’s office is running this show, and they have not made a final determination on the ticket allotment. There's a limited number of tickets for the event and DMF has requested a number of the unused tickets. If your interested in attending, contact DMF.
We will hook up for $29.95+ S&H per seat. Operators are standing by to take your order.
(PunchBowl)
(The Blog That Shall Remain Unnamed)
~ Thank You WHATFINGER NEWS for the Linkage! ~
© Posted By Diogenes Sarcastica™ on 4/24/2021 04:00:00 PM