How to Get Your Wanted Polling Results: Democrat Style

Middle Finger News Service - Whether or not to raise the debt ceiling is one of the more furious debates going on in government these days. Much to the chagrin of Liberal Democrats, the nation at is mostly against raising the ceiling.   Currently a $14 trillion line of credit that is about to be surpassed, being a blank check written by Congress to the federal government for unchecked spending and "we know what's best for you social engineering".

The Middle Finger Polling Firm conducted telephone surveys with 1,500 registered voters from across the country asking" Are you in favor of Congress raising the U.S. debt ceiling?" There is a margin of error of +/- 6%. 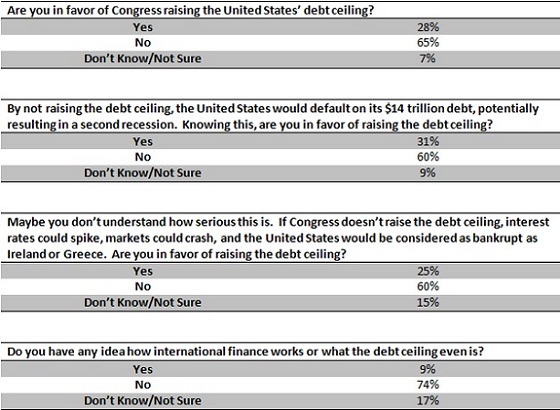 The Middle Finger pollsters could only find wide spread support for raising the debt ceiling by using the Democrat polling methods and phrasing the question thusly:

Analysis: Our poll shows 82% of voters polled agree that the debt ceiling should be raised. So, we find when polling on important issues of the day you find you cannot get people to agree with your desired results, use the Democrat polling methods. You might find that common Americans may just disagree, except in cases where doing so would lead to unwanted sex acts with a creature of the night.