Middle Finger News - With increasing instances of "work place accidents" al Qaeda terrorist leaders have announced the recall of 5,000 suicide bomb belts to correct a problem they say could either cause the bombs to detonate unexpectedly or fail to detonate at the proper time.  The recall covers all 120 series and 120b series bombs with a manufacture date between August and December of this year. 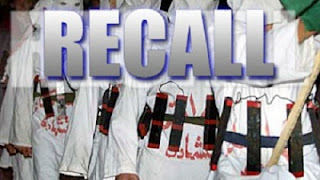 "The safety of our  suicide bombers are of a very high priority and pivotal to the success of the al Qaeda organization" a spokesman for the terrorist group,  Gezzer al-Ybama  told Middle Finger News. "We want to be assuring our al Qaeda personnel worldwide that encountering such a problem is of a rare occurrence  For those who lost their lives improperly due to the faulty bombs, we offer of our heartfelt apologies to your families who now must live with the shame," said al-Ybama. "As reparations to our fallen comrades, al Qaeda will be offering each terrorist martyr ten extra virgins and a camel upon their arrival in heaven."

It's too early to say whether this will hurt recruitment numbers going forward, even though there was a strong class to come out of al Qaeda summer camp  last year, but  al Qaeda  will have to undertake more community outreach programs if they want to avoid the inevitable public backlash. As it is, The "Big Brothers, Big Martyrs" and "Terrorism is FUNdamental" programs have shared some limited success in recent years, helping at-risk terrorist youths on the path to Jihad.