Osama Bin Laden's Eldest Wife May Have Collaborated with CIA 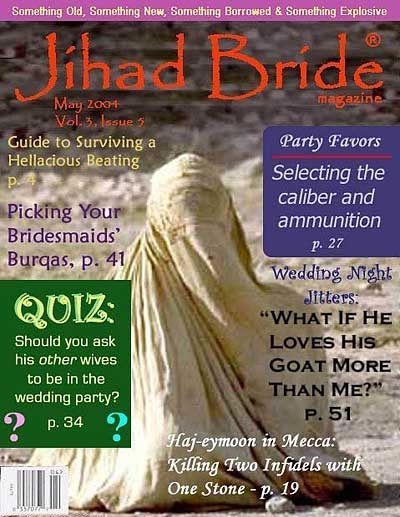 The Independent - Osama Bin Laden, physically and mentally frail and holed-up in a secret compound in a Pakistan garrison town, may have been sold out to the Americans by his eldest wife who was furiously jealous of the al-Qa’ida leader’s preference for a younger bride.

An eight-month investigation carried out by a retired senior Pakistani army officer, Brig. Shaukat Qadir, suggests Bin Laden’s eldest wife, Khairiah Saber, was so upset that after she moved into the house in February last year that she collaborated with the CIA teams that were hunting him. “Absolutely, I’m sure about it,” said Mr Qadir, speaking yesterday from Rawalpindi. “Hell hath no fury like a woman scorned.”

The retired officer has based his investigation on interviews with officials from the Inter-Services Intelligence (ISI) agency and access to transcripts of interviews with Bin Laden’s three wives who were living with him in the Abbottabad house. The widows remain in Pakistani custody and who have this week been charged with visa offences.

Mr Qadir was also permitted rare access inside the compound, where he was shown blood-stains purportedly belonging to Bin Laden, who was shot dead by US special forces. He said the motivation to invest his own money and time in the issue was the number of contradictions that appeared in the various accounts of the CIA’s surveillance operation and the eventual raid to kill Bin Laden, who was codenamed Geronimo."