Democrats and their "new normal" economy

A variety of news articles are talking about high unemployment and slow growth being the "new normal" for the US economy. They are echoing Pres. Obama from his 2010 interview on CBS's 60 Minutes. As reported by the Washington Post:


"What is a danger is that we stay stuck in a new normal where unemployment rates stay high," Obama said in an interview on CBS's "60 Minutes."People who have jobs see their incomes go up. Businesses make big profits. But they've learned to do more with less. And so they don't hire. And as a consequence, we keep on seeing growth that is just too slow to bring back the 8 million jobs that were lost."

Notice Obama's exceptionally superficial economic analysis. The economy is stagnating, he claims, because businesses have "learned to do more with less" as if competitive businesses had ever behaved otherwise.

The liberal concept of a "new normal" and its substitution for rational economic thought is not new. Michael Barone, for example, reviews  the 1930s and how liberals at that time also thought that stagnation was the new normal:


"Why did Roosevelt's second term turn out so poorly? Basically, because his policies were so unpopular. His 1935 labor act led to violent sit-down strikes in auto, steel and rubber factories, in which union victories were resented by the wider public.

His high tax rates on high earners -- the great white whale of the Ahab-like Obama -- plus something called the excess profits tax and the threat of onerous new regulation discouraged business investment, leading to what some called a capital strike.

In that setting, many liberals, as historian Alan Brinkley writes, "reached the pessimistic conclusion that stagnation had become the normal condition of modern industrial economies."

Sounds like Bill Clinton's argument: No one could do better. Democrats do the same thing (pursue anti-business policies) over and over again and each time are surprised to find the same result (economic stagnation). Apparently, talking about "new normals" is a psychological defense mechanism that allows their minds to avoid reaching the obvious conclusions. 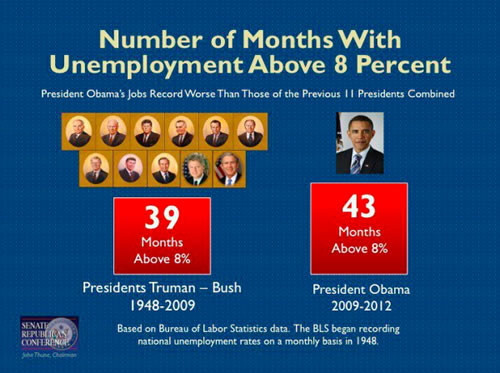