It's Time to Step It up, Mitt

Once you take into account the usual post-convention bounces in poll numbers, it is fair to say that the gap between Barack Obama and Mitt Romney remains within the margin of error. Last weeks weak job numbers, however, guarantee that the economy will remain the priority issue for most voters, and the race is expected to stay a close one until the first debate between the two candidates. 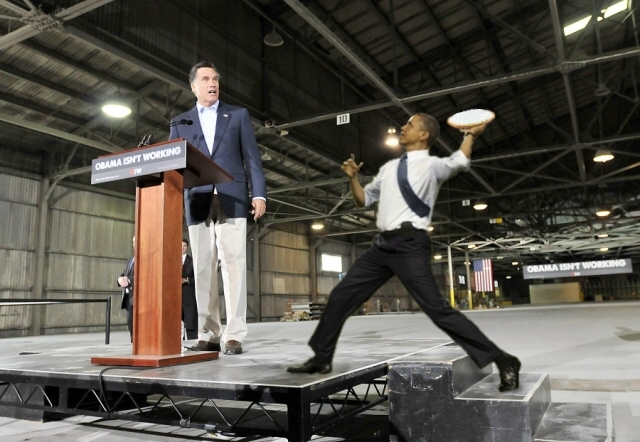 This being said, this election will be about more than economic indicators at the end of the day. Character and vision will take on an importance of their own when we enter debate season. Mitt Romney still hasn’t succeeded in conveying a clear idea of the kind of president he will be.

After the last three years Obama cannot regain the luster of 2008, where his historic quest attracted a herd of new sheep, and he hasn't succeed in showing that he has a record and accomplishments to defend. The Republican account of a Carter-like leader with a far left radical agenda seems to be a narrative that (conveniently filtered through the media) plays only to hard core conservatives. Against the record of the Golfer and Chief, a more compelling Romney should have given the Romney a decided advantage coming out of the convention season. But that did not happen.

Focus is now shifting to the first presidential debate, which will be held on Oct. 3. Until then, both parties will concentrate on the key swing states, with Florida, Ohio, Virginia, Colorado, North Carolina, Wisconsin and New Hampshire quite possibly shaping the outcome of the election.

Unlike Sarah Palin in 2008, it appears that vice presidential nominee Paul Ryan seems to not have generated enthusiasm beyond the Republican base, but could play a part in bringing support in swing states. Palin had her shortcomings, but it is on the record that her performance at the RNC in 2008 gave a needed post-convention bounce to the Republican ticket. The failure of Lehman Brothers in mid September 2008 did much to curb that enthusiasm, but Ryan, a far superior candidate than Palin, seems listless at this stage of the campaign. Hopefully the debates will show the enthusiastic Rep. Ryan of the congress.

Joe Biden may sometimes appear over-exuberant, and he does convey the aura of a crazy uncle who had one to many after dinner, but is we saw in 2008, if he can find the podium , he's a decent debater.

So the first debate will become a make or break moment for Romney-Ryan. Romney has steadfastly held to his position on his tax returns until Saturday, but has failed to give the country a clear Romney at this late stage of the campaign.

No matter how well Romney does in the debates, the media will not admit he did well, but the first debate will give him another opportunity to engage with the American public without a filter.